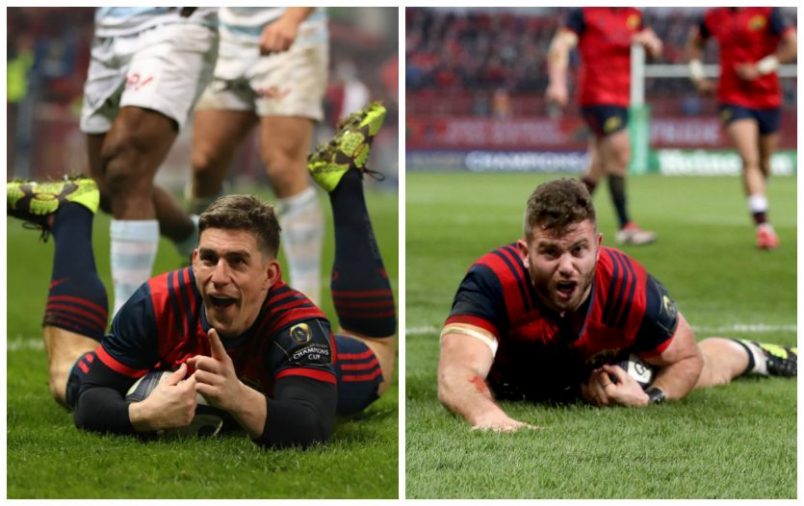 Ian Keatley and Jaco Taute have both signed two year deals to remain with the province.

Munster Rugby and the IRFU can confirm that Ian Keatley and Jaco Taute have both signed contract extensions while a number of players are set to depart the province at the end of the season, including Donnacha Ryan and Francis Saili.

Thirty-year-old Ian Keatley, who has been with the province since making his debut against Newport Gwent Dragons in September 2011, most recently marked his 150th appearance with a man of the match performance against Connacht in round 22 of the Guinness PRO12.  In October the experienced out-half became the second Munster player ever to score over 1000 points, achieving the milestone against Zebre in Thomond Park.  Keatley, who has been capped on five occasions for Ireland, has signed up to the province for a further two years.

Similarly 26-year-old Springbok Jaco Taute has signed a two-year deal that will see him remain with Munster until June 2019. Initially arriving on a loan basis from the Stormers and Western Province, the centre has lined out for the province on 24 occasions since arriving in September, scoring 8 tries.  Taute has made three appearances for South Africa.

Speaking about the signings Director of Rugby Rassie Erasmus said: “With Ian and Jaco we are retaining the services of two quality players.  Both highly experienced and versatile, they not only add value on field but are also good guys to have in our environment.”

On the departure front Munster’s most capped player of the current squad, Donnacha Ryan, will make the move to Top 14 side Racing 92 at the end of the season.  The 33-year-old has made 165 appearances since making his debut against Ospreys in September 2004.  The Nenagh-man enjoyed Heineken Cup and Magners League success over a 13-year-career in the red jersey and was awarded Munster’s Player of the Year in 2012.  On the international front he has made 47 Ireland appearances, lining out in two World Cups (France 2007 & England 2015), and last November played a pivotal role in Ireland’s historic victory against the All Blacks in Chicago.

Centre Francis Saili, prop Peter McCabe and lock John Madigan are also set to depart at the end of the season with the trio all moving on to other clubs, while centre Cian Bohane and lock Mark Chisholm have both confirmed they are to retire from professional rugby.

Saili has made 38 appearances over two seasons and scored 8 tries, while Bohane most recently captained Munster A in their British and Irish Cup success, with Chisholm, McCabe and Madigan all playing their part in the winning campaign.

Commenting on the departures Erasmus added, “I would like to take this opportunity to thank each of our departing players for their service to Munster Rugby.  Each individual has contributed to the province and played a role in our development and success to date.

“In recognising a stellar career for the province I would like to single out Donnacha Ryan for his outstanding service to Munster Rugby for over 13 years.  He is a leader on and off the field and has passed on his experience and knowledge to the next generation.  We wish Donnacha and all who are leaving all the best for the future.

“Of course there is still rugby to be played with a huge semi-final against Ospreys this weekend, giving our supporters the chance to bid farewell in what is the final game of the season in Thomond Park.”