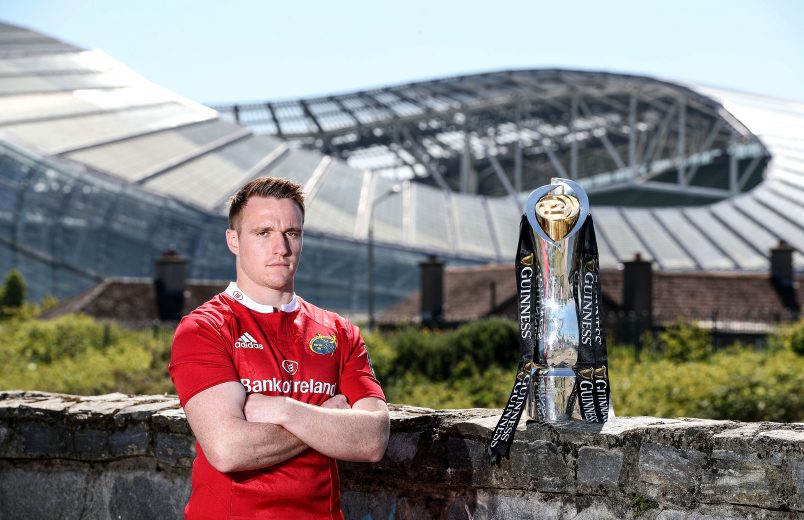 Consistent, versatile and a key component of the Munster machine, just some of the many commendations that could be bestowed upon Rory Scannell as he reflects on the season to date and prepares himself for Munster’s Guinness PRO12 semi final showdown against Ospreys and his first international Tour with Ireland to the USA and Japan.

Consistent, versatile and a key component of the Munster machine, just some of the many commendations that could be bestowed upon Rory Scannell as he reflects on the season to date and prepares himself for Munster’s Guinness PRO12 semi final showdown against Ospreys and his first international Tour with Ireland to the USA and Japan.

Last year named both the Munster Rugby Young Player of the Year and Greencore Munster Academy Player of the Year, much to the delight of the Red Army faithful, the career progression of the Corkman has continued on an upward trajectory.  The fact that last April’s win over Glasgow Warriors in Irish Independent Park marked his 50th Munster cap, at just 23 years of age, typifies just how far the centre has come over the past three seasons.

The last time Munster played knock-out action in the PRO12, Scannell was a fledgling talent in Year Two of his Greencore Munster Academy programme, yet it was more than evident back then that this young buck was one to watch.  Off the back of a starring role for the Ireland U20s the year previous – where he featured across the backline – the Dolphin clubman’s versatility was employed in wins over Cardiff Blues (home and away) and Benetton Trevsio, and his 2014/15 season culminated in selection for the Tbilisi Cup winning Emerging Ireland side that summer.

The UCC graduate hasn’t looked back since.  Be it at 10 or in the centre alongside the likes of All Black Francis Saili and Springbok Jaco Taute, Scannell has not just held his own, but shone brightly, with a passing, kicking, attacking and defensive repertoire that has also placed him on the radar of Ireland Head Coach Joe Schmidt.

Joining the Irish training camp at various stages this season, it came as no surprise when the Douglas native was today named in a 31-man squad for the Summer Tour to the USA and Japan alongside his older brother Niall, himself an Irish debutant during this year’s 6 Nations.  It may have been a while coming, but Scannell was never far from the Ireland boss’ thoughts, Schmidt monitoring his progress from afar and keeping in constant touch.

“He Just said that the guys who have played in midfield for him in the last few years have performed for him when they’ve been given the chance so it’s up to me really when I play with Munster to keep putting my hand up.

“When that opportunity arises I have to take it. He just said to keep doing what I am doing. As a 12 I am a bit of a different player to Robbie (Henshaw). He is obviously very physical and I am a bit more of a distributor and kicker so it’s good to have that as a midfielder.”

Last season, Scannell emerged as one of the shining lights in what was, for the most part, a tough season for players and fans to take.  While this season, he has remained a vital cog in a resurgent side, and a player that is all the better for his experiences of both the highs and lows.

“Last year, as a young guy coming in to the team you are maybe more nervous about trying things.  You get a bit more experience. You feel a bit more confident and you try a few more things – that extra pass, kick, whatever it may be.

“Every team goes through that transition period.  If you look at it we have quite a young squad and last year was probably that season where it didn’t go as well as we would have liked but there’s a lot of guys now who are regular starters who are building on that. We pride ourselves on our defence but we need to be a bit more clinical in attack and I think we are getting there. We won a lot of games this year that we would have lost last year.

“It’s been a good season as a squad, but we were very disappointed with the Saracens game.  We didn’t show up on the day so hopefully we won’t lose two. We reviewed it quite a bit. We know what we did wrong and why we didn’t come close to beating them.  It’s just about building on that. In games against the top teams in Europe you get three or four chances to put away a try and we didn’t put them away.  Saracens were clinical. When they got the chances to score they took them and that’s the difference.  We were a bit conservative in our attack. When we got those chances in their 22 we didn’t take them and that’s the main thing we really learned from that game.”

Scannell and his teammates will now hope to apply those learnings come 6.15pm on Saturday in what will be a repeat of the 2015 semi final at Thomond Park.  Ospreys are a side that can boast no less than four Lions, including Rory’s playmaking counterpart Dan Biggar.

“They (Ospreys) have threats all over the field, a lot of international players. Webb and Biggar are probably their key men.  They have been unbelievable for Ospreys and Wales the last few years so if we can shut them down we have a pretty good chance.

“But we have a lot of dangerous backs ourselves. Hopefully I can look to put a few of those guys away in the next few games.”