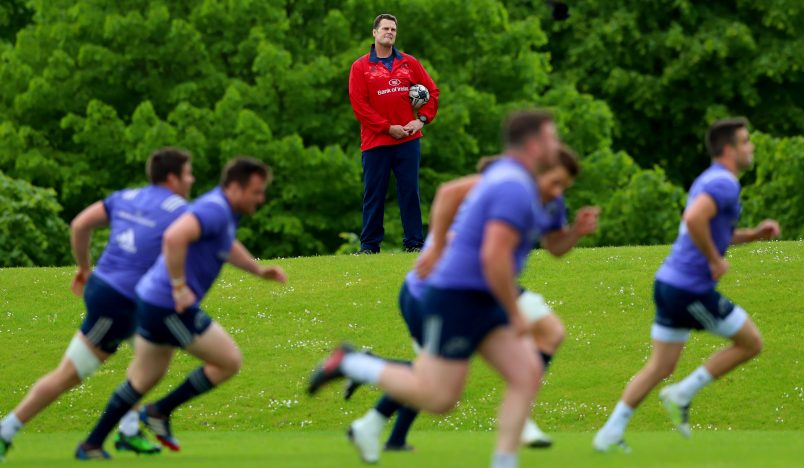 Overseeing it all, Director of Rugby Rassie Erasmus. ©INPHO/James Crombie

The latest behind the scenes shots as Munster step up preparations for this weekend’s Champions Cup semi final against Ospreys at Thomond Park, plus we get the pre-match thoughts of Director of Rugby Rassie Erasmus.

The latest behind the scenes shots as Munster step up preparations for this weekend’s Champions Cup semi final against Ospreys at Thomond Park, plus we get the pre-match thoughts of Director of Rugby Rassie Erasmus.

Munster’s first-place finish following 22 rounds of action sees them host fourth-placed Ospreys in a repeat of the 2015 semi final.  The Welshmen could themselves have secured home advantage were it not for a lack consistency at times this season, most recently faltering on the road to Treviso and in Llanelli where they suffered a 40-17 drubbing at the hands of Scarlets.

Nevertheless, Eramus is more than wary of what Steve Tandy’s men will bring to the table this weekend, especially when bolstered by British and Irish Lions Alun Wyn Jones, Justin Tipuric, Rhys Webb and Dan Biggar.

“I think that sometimes in local derbies, it can happen easily that one team can run away with it.  We lost heavily in our first game against Leinster and we could have lost by much more.  Derbies can bring that spice and surprise so we wouldn’t look at that game and think it’s the Ospreys side we’ll be facing.

“We have never faced them this year with the likes Alun, Rhys, Dan and Sam Davies all on board.  Also, they had nothing to lose against Scarlets as they had already qualified for the knock outs so they may have rested a few guys because of that.”

As a sub-plot to the Championship action, Lions scrum halves Conor Murray and Marshall come face to face in Limerick, however Erasmus feels that any aspirations of wearing the number 9 Test jersey in New Zealand will play second fiddle to the job at hand for both players on Saturday.

“In the back of their heads they will be thinking, ‘I’m competing with this guy for the starting spot so let’s have a proper go at one another’.  But if you make it too personal it can take your focus off what you are doing and you’ll be the one to lose out because your team will be losing.

“Conor and Rhys are both experienced professionals and at the end of the day they have to be close teammates when they go New Zealand.  Even if Conor plays in the Lions squad and doesn’t make the team, he’d support Rhys. That’s the kind of guy he is.”

No host side has ever lost a PRO12 semi final, due in large part to the boost that comes with vocal and energising home support.  Munster have enjoyed sell-out crowds across the season, both in Limerick and Cork, with Erasmus and his red warriors keen to finish out the ‘extended’ Thomond Park season on the right note.

“I know we will have excellent support again on Saturday and everything I have experienced here has been unbelievable in comparison to what I have experienced before in my life.  The fans have been excellent to support us not just in the highs, but in the lows as well this season.

“Our biggest incentive for performing well on Saturday is the fans.  We couldn’t do it for them when they supported us against Saracens, so that will be a massive motivation for us.

“If we don’t achieve a trophy, was it an unsuccessful year?  I wouldn’t say that, but it would be disappointing if we don’t at least get into a final and have a proper crack at it.  That would be a great story to tell, especially after all the squad has been through this season.”

With home advantages secured, help #MakeItCount this Saturday at 6.15pm.  Tickets can be purchased online here, from the Munster Rugby Ticket Offices or by calling 061 421103.