Bleyendaal Is Named Munster Player Of The Year 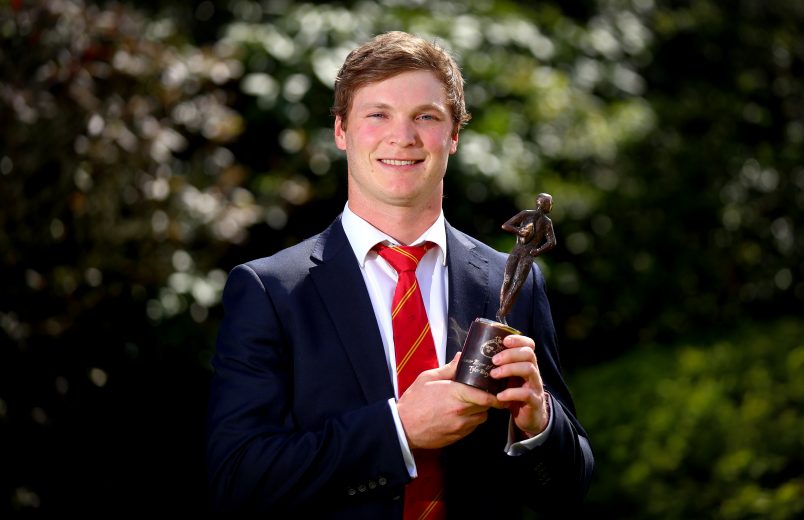 Tyler Bleyendaal was today announced as Munster Player of the Year at the annual Munster Rugby Awards in association with the Irish Independent.

Tyler Bleyendaal was today announced as Munster Player of the Year at the annual Munster Rugby Awards in association with the Irish Independent.

Over 240 people attended the event which took place at the Maryborough Hotel in Cork with eleven awards presented to worthy recipients involved in professional and domestic rugby in Munster.

The Munster senior squad and management were all in attendance, joining domestic game volunteers in recognising and honouring rugby achievements across the province with all proceeds raised on the day going towards the Alzheimer’s Society of Ireland and Diabetes Ireland – Munster Rugby’s nominated charities for the current season.

Beating off stiff competition from John Ryan and Niall Scannell, Tyler Bleyendaal was named this year’s Munster Rugby Player of the Year after a hugely impressive season where, in 24 appearances, the New Zealander picked up four man-of-the-match awards and captained the side on five occasions.  With a cool temperament and great time on the ball, the 26 year old was instrumental in Munster making this season’s Champions Cup and PRO12 semi finals.  Off the tee and out of hand, his kicking and control has been near exemplary while his ability to marshal his side around the field has facilitated excellent team performances from the men in red.  The Munster Rugby Awards is not the only forum to recognise his contribution this season.  Bleyendaal was also nominated for European Player of the Year alongside Conor Murray and CJ Stander, and is one of the forerunners for the Guinness PRO12 Golden Boot award.

Young Player of the Year was awarded to Darren Sweetnam.  A product of the Greencore Munster Rugby Academy, the West Cork native made his debut in February 2014, however this season the winger has truly announced himself on the PRO12 and European stage.  A man-of-the-match performance against Zebre at the beginning of the season was a sign of the flair to come from Sweetnam who, prior to an injury against Leinster in December, had started every single game.  In 25 appearances to date this season, the 23-year-old has played the full-80 in all but five games and his tally of seven tries is testament to his proficiency in attack – perhaps best showcased by his speed and footballing skill when touching down against the Maori All Blacks while wearing his old school socks of Bandon Grammar.

The John McCarthy Award for Greencore Munster Rugby Academy Player of the Year went to Conor Oliver.  In just his second year with the Academy, Oliver has stood out as one to watch for the future.  Making his PRO12 debut against Glasgow Warriors in February 2016, just over a year later the back row would win a man-of-the-match accolade against the same opposition in a season where, to date, he has made 15 senior appearances and scored three tries.  In addition, the 21-year-old played an integral role in Munster A claiming their second B&I Cup title, crossing for a brace of tries in the semi final win over Ealing Trailfinders at CIT.

Siobhan Fleming was announced as Women’s Player of the Year, winning the award for a fourth time. The current captain of the Munster Women’s team, after playing inter country football the Kerry Native took up rugby in 2007 and within three years had won her first Munster cap.  Excelling on the international scene also, she has won a Grand Slam and was also part of the 2014 Ireland Women’s World Cup squad that defeated New Zealand.  With her strong leadership felt off the field as well as on it, Fleming was on hand to meet and inspire the next generation of players at this season’s age-grade Cup finals held in her home club of Tralee RFC.

Referee of the Year – Joy Neville
Following a highly successful playing career, including 70 caps for Ireland and a Grand Slam, Neville embarked on a trailblazing refereeing path after joining the Munster Association of Referees in 2013. Since then she has become the first woman to referee in Division 1A of the Ulster Bank League, the first to take charge of a British & Irish Cup match and the first to act as Assistant Referee in the European Challenge Cup.  The Limerick native also referees in the HSBC World Rugby Sevens Series, and later this year will officiate at the Women’s Rugby World Cup to be held in Dublin and Belfast.

Hall of Fame Award – Barry McGann
In a stellar playing career, McGann played for Presentation College Cork, Cork Constitution, Lansdowne, Munster and Ireland, winning two Senior and two Junior Cup medals with PBC and three Munster Cup medals with Cork Constitution, along with many other League and Charity Cup trophies.  Gifted with the deftest of touches with the boot, the outhalf won 35 caps for Munster and 25 caps for Ireland, scoring 60 points in the green jersey which included two penalties against All Blacks at Lansdowne Road in the famous drawn game of 1973.  An all-round sportsman, the Cork native was an accomplished sprinter in his early years, a single handicap golfer, was capped for Ireland Youths in soccer, and played for Shelbourne in the League of Ireland.

Senior Club of the Year – Cork Constitution FC
Picking up the award for the second year running, Con have enjoyed another incredible run at various age-grade and senior levels.  The senior team made history by claiming five Bateman Cup titles in a row, the first time this has been achieved since the competition’s inception in 1886, while the Temple Hill side have also reached the final of the Division 1A All Ireland League after securing victory against league-leaders Lansdowne.  The result sets up a repeat of last year’s showdown against Clontarf at the Aviva Stadium this weekend.

Junior Club of the Year – Clonmel RFC
Founded in 1892 and one of the oldest clubs in Ireland, this year’s award is a fitting achievement for Clonmel RFC who enjoyed a hugely successful season at Junior level.  The Tipperary outfit lost just one game over the course of the entire season, winning all 13 other games.  Operating from the fringes of the town, this club boasts three playing pitches, a training pitch, all-weather facilities, a modern seated patrons’ stand, a gymnasium and a friendly, inviting clubhouse.

Club Youth Section of the Year – Nenagh Ormond RFC
Going from strength to strength over the last number of years, this season both their U16s and U18s were beaten semi-finalists in the Munster plate, while their U16s also came from 22-3 down against Ennis to win the North Munster Cup 24-22.  In addition, over the Easter break three teams went on foreign tours, while on home soil, the club hosted Larne for four days.  Among a host of other activities, the club also makes a consistent effort to bring youth squads to Thomond Park to cheer on Munster during the season.

Club Mini Section of the Year – Fethard and District RFC
Formed in the heartland of Tipperary in 2001, in the club’s short time it has grown to be one of the locality’s largest sports clubs – in an area that is traditionally a GAA stronghold.  Now fielding boys teams at every age group from U6s to U18s, along with U13s, U15s and U18s girls teams, the club have had tremendous support and encouragement from parents and the local community.  The future of rugby is looking bright in South Tipperary.

This historic school, with 375 players across 15 teams, has had a memorable year with Munster Schools Senior Cup success and several international milestones for both current and past pupils.  The year began with back-to-back successes over the Portuguese U18 national side before defeating eventual Ulster and Leinster Senior Cup winners RBAI and Belvedere during the season.  The memorable year continued when they had eight players selected for the Munster U18/U19 interprovincial series, five of whom were also selected for Irish representation.

Click here to view the gallery from the 2017 Munster Rugby Awards.