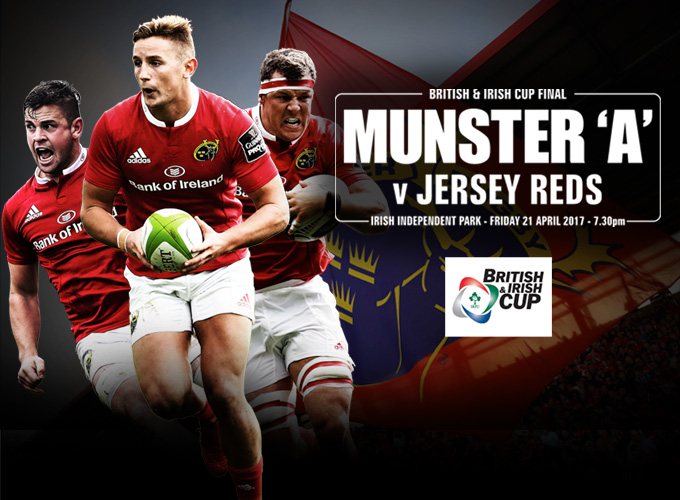 With Munster A’s British and Irish Cup final against Jersey Reds at Irish Independent Park almost upon us (Friday at 7.30pm), we look back at their campaign to date, one that has seen the province top Pool 2 and see off the challenge of Ulster A and Ealing Trailfinders at the quarter and semi final stages.

In what was a baptism of fire for Malone‘s young charges in Round 1, reigning champions London Welsh handed them a 15-30 defeat at Midleton RFC in October.  However that result would later be expunged after the London side went into liquidation and were subsequently disqualified.  From there, Munster A did all that could be asked of them, remaining undefeated home and away to Rotherham Titans and Doncaster Knights, and picking up some crucial bonus points to qualify for the knock out stages as the competition’s top seeds.  Comprehensive wins over Ulster A and Ealing Trailfinders in the knock out stages thus far sees the Munstermen contesting their first final since claiming the title at Irish Independent Park in 2012.

Having fallen at the semi-final stage of last year’s competition, Jersey Reds also began their 2016/17 campaign with a loss on Irish soil, defeated 19-6 by Ulster A in Belfast. But since that set-back in October, the Reds recovered to top Pool 1 by doing the double on Cardiff Blues Select and London Scottish, and getting the better of Ulster A in the return match at St Peter. This meant a home quarter-final against Cornish Pirates, which ended 36-20 to the Reds, and then a 17-25 semi final success away to the much fancied London Irish at the Madejski Stadium.

In previewing Friday night’s final and reflecting on his side’s season to date, Munster A Head Coach Peter Malone commented, “It’s great to be working towards a massive Cup final on Friday night and to have two teams competing for something this weekend has brought real intensity to training with a great buzz around the place.  Part of the job on weeks like this has been running Saracens plays, but that hasn’t taken our focus off Jersey whom we’ve studied at length and prepared for very well.

“Jersey are a big and physical Championship side who also have an ability to put width on the ball.  Their home record has been hugely impressive this season so hopefully being away will unsettle them a small bit.  Their back row are particularly potent, as is their scrum and maul, and having beaten London Irish in both the Championship and the B&I semi final, they have shown what a serious team they are.

“This is a very important competition for Munster Rugby and is a great pathway for lads to develop.  This season alone for example, our young lads have faced massive challenges against the likes of Doncaster and Rotherham.  You have to match that physicality before you can showcase your skills and ability, and once you do that, you are ready for professional rugby.  Dave Kilcoyne, Duncan Williams and Billy Holland are just some of the lads who really kicked on after our success in 2012 so the B&I Cup has served us well over the years.  To have progressed so far this season is a good mark for the strength in depth in the squad and the players coming through for the next generation.”

Tickets for Friday night’s B&I Cup final can be purchased online here, from the Munster Rugby Ticket Offices at Irish Independent Park and Thomond Park or at the ground on match night.

Leading 10-21 at half time through a Te Aihe Toma try, a James Cronin brace and pinpoint conversions from the boot of academy playmaker Bill Johnston, the province responded to Rotherham’s second half comeback with another brace, this time from academy hooker Vincent O’Brien after excellent work at maul time.

The return encounter a week later also saw Munster A cross the whitewash on five occasions.  Peter McCabe and Sam Arnold dotted down in the right corner, and with Steve Crosbie adding a penalty, the hosts were fully in control at the interval, leading 15-3.  Crosbie was one of three try scorers upon the resumption with academy duo Gavin Coombes and Rory Burke also crashing over in a 34-3 drubbing of the Englishmen.

Taking time to settle in this encounter, Munster A did well to concede just one try as Doncaster took command in the opening 20, Jarad Williams crossing for the opening try. Malone’s men began to boss proceedings approaching the interval with Coombes notching up his second try in as many games.  Toma’s conversion made it 7-7 at the break.  Captaining on the day, Robin Copeland bolstered Munster A’s ever growing momentum and confidence with a try on 42 minutes before Cian Bohane and academy centre Calvin Nash both picked off intercepts to ensure Munster A left Castle Park with a maximum return for their efforts.  The result guaranteed them a quarter final spot.

The hosts headed to Bandon in the knowledge that a win would ensure a home quarter final.  A scrappy affair at first, early scores came by the way of penalties with Rotherham leading 6-3 before Munster A found their rhythm and crossed for two unanswered tries through Stephen Fitzgerald and captain Bohane.  A Doncaster penalty on 52 minutes made it a tense second half before Cork Constitution’s John Poland eventually made sure of victory with Munster A’s third try on the 79th minute. The boot of Toma again played a pivotal role in proceedings, the kicker enjoying a 100% kicking record off the tee for the second consecutive game.

In an encounter where the northern outfit enjoyed much, if not most, of the possession, they failed to make it count unlike Munster A who displayed a clinical edge, especially in the opening half.  Tries from Darren O’Shea and Sam Arnold helped Munster A take a commanding 23-3 lead into the break.  Ulster A tried in vain to chase down their provincial counterparts on the scoreboard upon the resumption and it was David Johnston who drew the only blood of the second half, kicking his fourth penalty with the result beyond doubt at that stage.

A thoroughly convincing and astute performance against Ealing Trailfinders at CIT saw Peter Malone’s charges book their place in the final on a 25-9 scoreline.  To keep try-less a side that had notched up 20 tries in their previous two outings was testament to the Munster A defence, while on the attacking front, tries from Arnold and Conor Oliver (brace), and further points off the tee from the Johnston brothers kept the hosts well in control throughout at CIT.