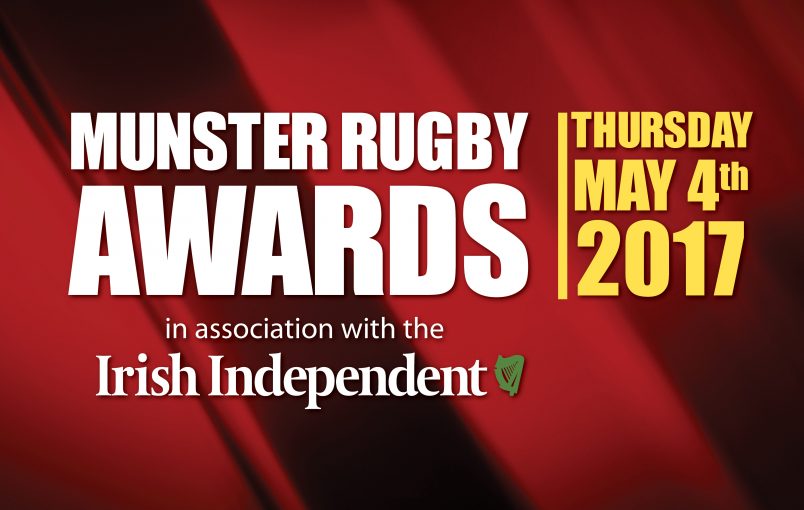 Munster Rugby have teamed up with nominated charities The Alzheimer Society of Ireland and Diabetes Ireland for this year’s Munster Rugby Awards in association with the Irish Independent.

The awards take place at a lunchtime event on Thursday May 4th at the Maryborough Hotel in Cork with the Irish Independent sponsoring the award for the fifth year running.

The annual event celebrates the best of Domestic and Professional rugby within the province, recognising both individual feats and those of clubs and schools on and off the field.   Eleven diverse categories will be honoured, ranging from Munster Rugby Player and Young Player of the Year through to emerging academy talent, women’s player, referee, clubs and schools.

The event will culminate with the announcement of Munster Rugby’s Player of the Year which, as with previous seasons, will be decided by public vote.  Nominations will be revealed early next week after which supporters can cast their vote via the Irish Independent website.

Garrett Fitzgerald, CEO Munster Rugby said, “Firstly I would like to thank the Irish Independent for their continued support of rugby in the province and our annual awards.  On May 4th, we look forward to celebrating rugby of all levels, from those who have excelled in our professional teams, to those who have given us many wonderful moments in the Women’s, Schools and Club game, and across the Domestic scene – the foundation of our game here in Munster.  We are delighted also to support two wonderful and deserving charities in The Alzheimer Society of Ireland and Diabetes Ireland for whom we hope to raise both funds and awareness on the day.”

Geoff Lyons, Marketing Director, Independent News and Media, added, “Irish Independent are delighted to once again partner with Munster Rugby for their annual awards. In what has been an incredibly emotional and exciting season for the club, we look forward to remembering and celebrating on the day. Readers of The Irish Independent and Munster Rugby supporters will also have their opportunity to cast their vote for the player of the year award, with details being announced shortly”.

There will also be a raffle of Munster Rugby prizes on the day with all proceeds going to The Alzheimer Society of Ireland and Diabetes Ireland.