Get Aboard The #RedWave 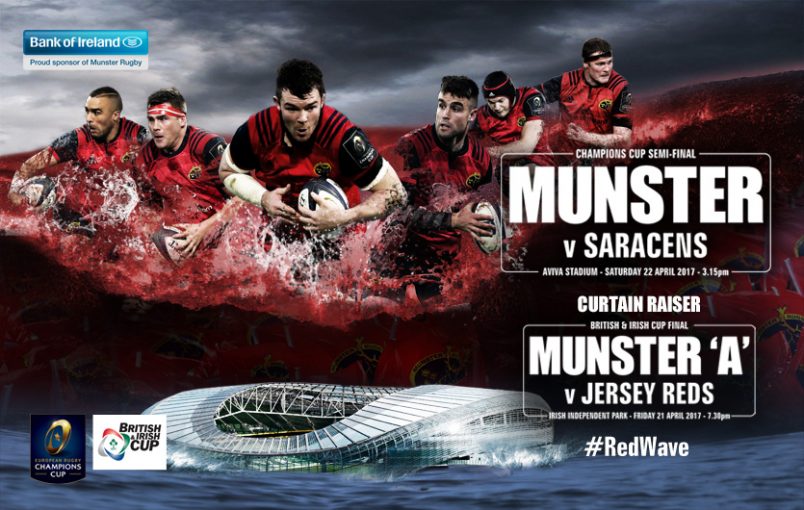 And so it begins, a truly massive week of action with the province contesting both the British and Irish Cup final and Champions Cup semi final.  Here’s your comprehensive guide to how you can behind the men in red and get aboard the #RedWave this week.

And so it begins, a truly massive week of action with the province contesting both the British and Irish Cup final and Champions Cup semi final.  Here’s your comprehensive guide to how you can behind the men in red and get aboard the #RedWave this week.

On Friday night at 7.30pm, Munster A return to Irish Independent Park, Cork, the ground where they claimed their first B&I Cup title in 2012.  In looking to replicate the success of the likes of Billy Holland, Dave Kilcoyne and Duncan Williams, a new generation of emerging talent including David Johnston, Conor Oliver and Brian Scott host Jersey Reds, and with visiting fans travelling in numbers, you’re asked to come out and support the future stars of the province as they bid to get the weekend off to a winning start.

Tickets can be purchased online here, from the Munster Rugby Ticket Offices at Irish Independent Park and Thomond Park or at the ground on match night.

Over 37,000 tickets have been distributed via official Munster channels (MRSC, Season Ticket holders and Clubs), but we have secured the last of the tickets for Saturday’s Champions Cup semi final where Munster face reigning champions Saracens at the Aviva Stadium at 3.15pm.

To win, simply show us how you are getting aboard the #RedWave in support of Muster this week.  From wearing your jersey to work to painting the house red, take a picture and share it with us on Twitter (@munsterrugby) or Instagram (munster_rugby) using #RedWave.  Alternatively email your entry to competitions@munsterrugby.ie.

Winners will be notified no later than Thursday at 5pm.

Show your support as you drive around the province this week and head for Dublin this weekend.  Munster car flags are available from the reception at Irish Independent Park, Cork and Thomond Park, Limerick.  Also, from Thursday, flags will also be available at Bank of Ireland branches across Cork and Limerick and in the following towns.

Ireland Head Coach Joe Schmidt heads up the panel of guest speakers at Munster’s only official pre-match hospitality event, taking place at the Clayton Hotel, Burlington Road.  Today FM’s Matt Cooper will chair the rugby panel with Paul Wallace, Keith Wood and Alan Quinlan also joining Joe Schmidt on stage as all things Munster and Saracens are covered off in the pre-match analysis.

Supporters can enjoy the pre-match atmosphere along the Red Mile which starts at Wanderers FC and takes in Paddy Cullens and Crowes pubs which, along with the Lansdowne and Sandymount Hotels, will be decked out in special Munster branding thanks to our partner Guinness.

Buses: Courtesy of EPCR, Munster Rugby and the MRSC are delighted to be able to offer a FREE return bus service from each county for MRSC members. The Limerick, Cork and Clare buses are fully booked with limited availability on Kerry, Tipperary and Waterford buses. Full details on buses, departure points, arrival point and more can be found here.

Meeting Points: All MRSC buses will drop members to Wanderers FC, where food and drink facilities will be available. From there, members will march into Ballsbridge where a number of bars will be decked out in full Munster colours as part of a Red Mile to the stadium.  For those coming from Dublin City Centre, the MRSC Dublin venue – The River Bar, 1 Burgh Quay – will be welcoming all travelling Munster supporters. This meeting point is ideal for those travelling to Dublin by train or bus and is in close proximity to the Tara Street Dart Station for access to the Aviva Stadium.