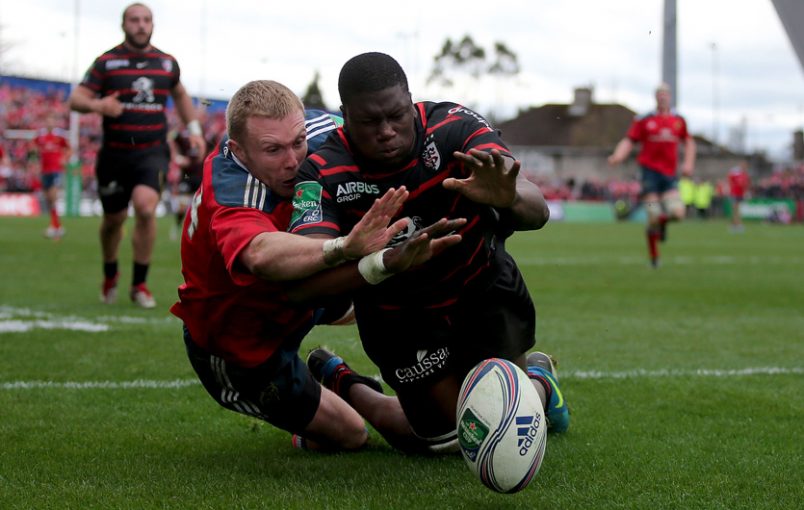 Munster and Toulouse, two sides synonymous with European rugby’s premier competition.  And it’s easy to see why.  Munster, the side with the most wins in the Champions Cup, Toulouse, the most decorated team in the competition’s history.

This Saturday, these two European powerhouses go toe-to-toe in what is a record 16th quarter final appearance for both sides.  Add an increased-capacity crowd of 26,200 into the mix, and it truly is hard to contain one’s excitement for this momentous tie in Thomond Park.

Fabien Pelous, Ronan O’Gara, Jean Baptiste Elissalde, Mick Galwey.  Just some of the greats who have graced this European fixture throughout the years.  And while some of those taking to the field this weekend will enter uncharted waters, for others, it will bring them back to a memorable – or forgettable, depending on your allegiances – April afternoon in 2014 when Munster ran riot over Toulouse.  Simon Zebo, Gael Fickou, Peter O’Mahony and Yohann Maestri, to name a few, all featured in Limerick that day where the hosts finished out just shy of a half-century scoreline, winning 47-23.

2014 is by no means standalone.  Throughout the years, meetings of Munster and Toulouse have stood long in the memory.  Learning harsh lessons from a 60-19 drubbing in the 1996 pool stages, Munster, as is their nature, persevered and never gave up, exacting revenge in the 2000 semi-final, suffering an agonising defeat at the same stage in 2003, and ultimately securing a second European crown against their familiar foes in 2008.

In terms of the competition’s history, David will meet Goliath come 5.45pm on Saturday.  Both sides have played 156 times in the competition, both have won over 100 times (Munster 108, Toulouse 105), both have reached the knock out stages a record 16 times and both have scored over 400 tries in Europe, Leicester Tigers the only other side to do so.

Hard to believe then, that despite such a shared European history, 2014 marked Toulouse’s first trip to Thomond Park.  One could argue that the element of the unknown worked against the Frenchmen as they entered what many describe as ‘an atmosphere like no other’ for the first time.  However, no less than 14 of the Toulouse side that took to the field that day remain in situ and will have informed and prepared both themselves and their newer colleagues accordingly for Saturday’s rematch.

With five wins from six that saw them top Pool 1, Munster may enter this weekend with the best defence of the campaign, but if any side has the capability to ask questions of it, it’s Toulouse.  Never easy to contain, Ugo Mola’s men averaged more offloads per game than any other side in the pool stages with Joe Tekori making 21 alone, six more than any other player.

Maestri, Tekori, Thierry Dusautoir, Patricio Albacete.  The side is awash with household names of world rugby.  And that’s before you consider their backs.  Yoann Huget, Luke McAlister, Sebastien Bezy and Gael Fickou are all big game players, the latter one of the shining lights in a resurgent French side during this year’s 6 Nations.

But the same can be said of Munster.  O’Mahony, Donnacha Ryan, Simon Zebo, European Player of the Year nominees CJ Stander, Conor Murray and Tyler Belyendaal.  All world beaters in their own right, especially on home turf and backed by the inimitable and unrivalled support of a sold-out Thomond Park.

Four-time champions Toulouse enter this weekend off the back of inconsistent Top 14 performances, putting 42 points on Lyon before, most recently, failing to pick up a little as a losing bonus point against Bordeaux.  But make no mistake, a team with a European history as rich as theirs will be out avenge 2014 come kick-off on Saturday, sentiments echoed by Munster squad captain O’Mahony this week.

“We have a massive challenge this weekend, but it’s great to be back at Thomond Park for the quarter final of Europe – not to have to drag our supporters all over Europe.  It’s nice to give them a home one and hopefully we can give them something to shout about.  Both teams have a huge amount of experience and are successful and proud in Europe.  Toulouse, with their history, will want to be back winning trophies, as do we.

“They are a big, big pack, possibly the most physical in Europe and we can’t let ourselves be thrown about.  We are a very proud team who will font up and get stuck in but we’ll do plenty thinking on top of that.  Rassie and the lads will have a few things for us this week, but it starts with our physicality and our basics and we move from there.  They have a world class backline as well with a huge amount of internationals and one thing’s for certain, they won’t lack guys who have experienced rugby at the highest level, be that in Europe or in Test matches.”

Director of Rugby Rassie Erasmus will take charge of Munster in a home play-off for the first time this weekend.

“This weekend is massive. I can see it in the eyes of the players who have been there before how big it is. The guys are focused and you don’t really need to tell them how big it is. I have experienced some interesting times this year for various reasons at Thomond Park and it was a first time for me visiting many away venues but another first, a quarter-final at home.”

“Every player wants to play at the business end of the competition so it is great for me. It feels like I’ve just blinked my eyes and we are already at the knockout stages so I’m just trying to slow down the time and take it all in and enjoy every single moment of it but I’m very grateful and it’s going to be fun.

“Luckily I’ve also played in a few big knockout games in Super Rugby and Currie Cup so I know what’s coming. It’s going to be warfare out there and it’s not going to be easy and that’s what sport is. Moments like these that you train for, you go for eight weeks pre-season, sometimes play through niggles because this is what everyone wants to play for, play for Munster in the big games.”