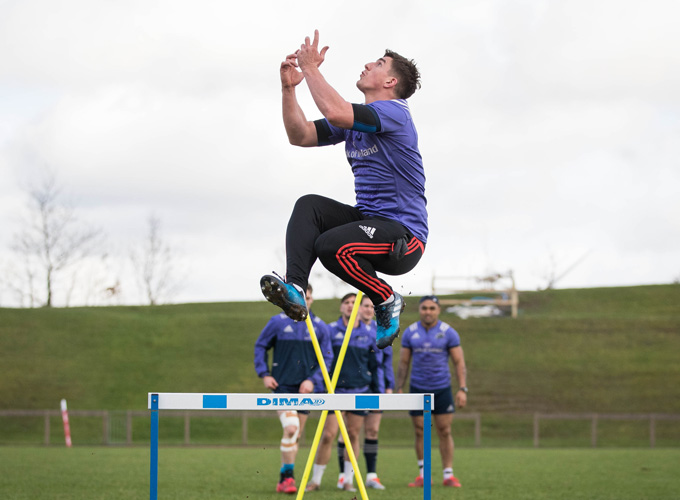 Munster took to the training field in UL yesterday as they began preparations for the challenge of Cardiff Blues in Wales this Saturday in round 17 of the Guinness PRO12. See our latest training shots and get the pre-match thoughts of second row Billy Holland.

Despite suffering just their first defeat at Thomond Park since December 2015, the manner of the defeat is what will perturb the Munstermen, letting go a commanding 21-6 half time lead, conceding three tries in under ten minutes and failing to score in the entirety of the second half. Holland reflects on last Friday’s proceedings.

“Yeah very frustrating. Look I think we started well and we were close to getting a fourth try and you go in 21-6 up at half time and you turn around and they score three quick tries. I think we just fell asleep at the wheel a little bit. Our discipline was poor. We didn’t get out of our half well and they are a very dangerous side. They caused a few hiccups this year, they’ve gotten better as the season’s gone on and they got 21 points in quick succession. We struggled to get back from that.”

The round 16 slip up saw Munster slip to third in the PRO12 standings with the province now hoping to creep back up the table at the Cardiff Arms Park this weekend. Easier said than done however, the Blues already defeated Munster at Irish Independent Park this season, while Munster’s visit to the Welsh capital last season also ended in defeat.

“No, we struggled against Cardiff recently and we lost to them over there last year. Losing to them in round two of the season this year gives them the upper hand I think. Plus they had a great win over Edinburgh last weekend by a point so we have our work cut out for us.”

As is becoming more and more prevalent in the modern game, Saturday’s encounter sees the men in red do battle on a 4G surface.

“For a young fella like myself it’s great, you get used to it. It is different at first but we’ve played quite a few games this year, we’ve played Glasgow twice on that surface, we’ve played over in Cardiff several times so you do get used to it. We’ll have the opportunity to train on it tomorrow here in UL. It’s slightly different and I think it favours the attacking side, it favours momentum so there are a few little things. I think the kickers say there are a few little nuances that I’m not privy to. It’s something different I prefer grass but I’m a forward so I’m always going to say that.”

Next Home Game
Munster's next game at Thomond Park sees them host European giants Toulouse on Saturday April 1st at 5.45pm in the quarter final of the European Champions Cup.