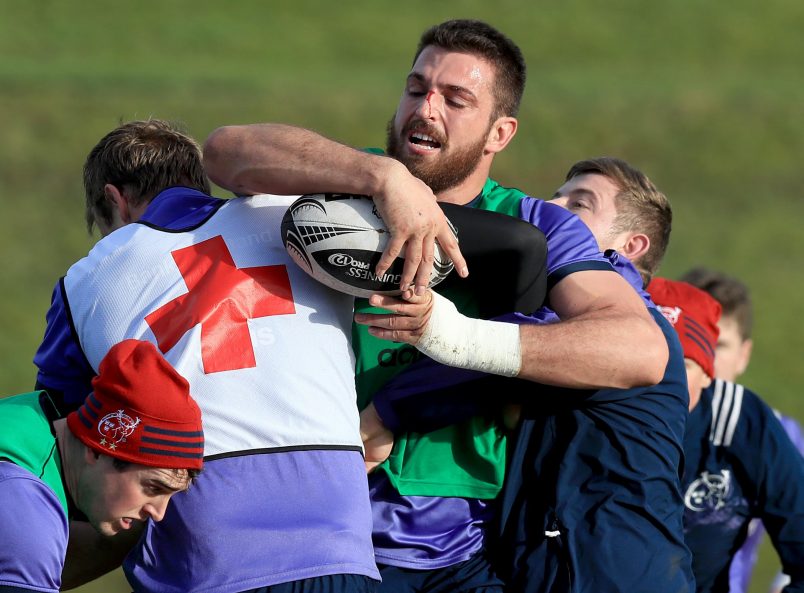 The latest injury update as preparations commence for the top of the table PRO12 clash against Ospreys, plus we look back at the weekend’s representation on both the international and domestic front.

Jean Kleyn continues to be treated for a neck injury he sustained in the bonus point victory and his involvement in training will be reviewed as the week progresses.

Jaco Taute will not train today for a knock to his shoulder but is expected to take part in the sessions as the week continues.

Darren Sweetnam showed no ill effects after making his return from a knee injury on Friday night, securing 55 minutes of game-time against the Welsh opposition.

Similarly, Duncan Casey (knee) has no complaints after starting for his club-side Shannon in the AIL on Friday night in Thomond Park. The hooker last played against Glasgow Warriors in October.

After meeting with the specialist last week for an ankle injury there was positive news for John Madigan with the lock not requiring surgery, and he will continue to be treated by the medical team.

On the international front, Niall Scannell made his Ireland debut starting in Saturday’s round two 6 Nations tie against Italy. The hooker was a late addition to the starting line-up after Rory Best was ruled out through illness. Munster’s eight representatives all featured in Rome with Keith Earls scoring two tries and CJ Stander claiming a hat-trick and the man of the match award.

In the All Ireland League, although on the wrong side of the results, a number of senior and academy contracted players featured for their clubs at the weekend.

Cian Bohane started for Young Munster at Tom Clifford Park, while Abrie Griesel, who was a Munster replacement in Cork on Friday night, was named on the bench.

The academy’s Ned Hodson and Liam O’Connor started for Cork Con while Vincent O’Brien and Rory Burke were included in the replacements.

While in Division 1B, the academy’s Stephen Fitzgerald and Greg O’Shea joined Duncan Casey in the Shannon side that recorded a 43-20 victory over a UL Bohs team that included Angus Lloyd for the first time.

Scarlets Next In Thomond Park