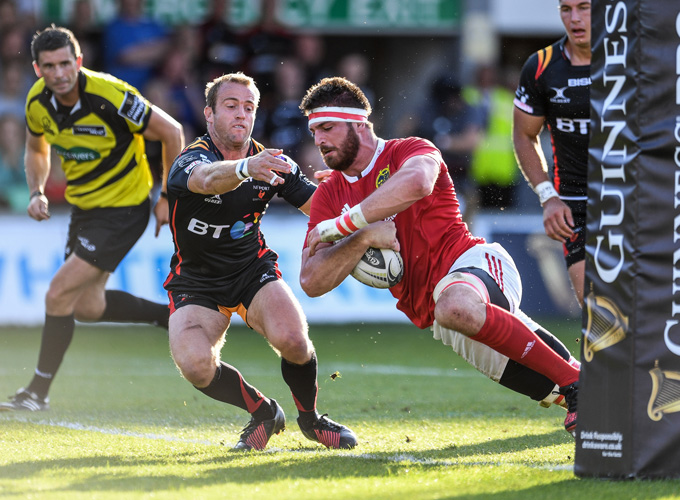 Munster enter this weekend’s encounter as table toppers in the Guinness PRO12 but with Ospreys and Leinster hot on their heels, Erasmus’ men will target nothing less than a win when they welcome Newport Gwent Dragons to Irish Independent Park on Friday night at 7.35pm.

Munster lie just one point clear of Ospreys on the PRO12 table and four points clear of third placed Leinster. However both the Welshmen and the eastern province travel to Italy this weekend with realistic ambitions of bonus point wins over Zebre and Treviso respectively.

All the more reason then for Munster to turn in a big performance in Cork if they are to consolidate their position at the top of the table and go eight games unbeaten in the Guinness PRO12.

Munster may have taken four points from Edinburgh last weekend, but will look to bounce back from and error strewn performance in which they failed to take scoring opportunities and ultimately gifted Blair Kinghorn with the chance to snatch victory for the hosts at the death. His long range effort fell just short and Munster went top of the Championship, but only just.

With such strong representation in the Ireland 6 Nations squad at present, Director of Rugby Rassie Erasmus made no less than eleven changes for the Edinburgh encounter and remained happy with his side’s effort in defence and how those stepping into the breach stepped up.

“Jacques [Nienaber] is a really good defensive coach but the players must take a hell of a lot of credit and I think Jerry [Flannery] and Felix [Jones] too. People always see defence in isolation but defence links to the scrum, to the lineout defence, to the kicking game which Felix is handling, so it all links into one another. I think it’s a great group effort from us and the young boys stepping up and the academy boys coming in and fitting into the system and slotting in. I think that’s a positive so we have to build on it.”

“We are in new waters with fourteen guys up in national camp. It was great for the guys who are not regular starters to start and then at the end to grind it out with our defence. The defence is usually the thing that shows the character of the team and now our challenge is to get some attacking play going.”

One only has to go back as far as last season for Munster’s most recent defeat to Dragons. On a cold December afternoon at Rodney Parade, the province came to rue missed opportunities in the opening half as the boot of Dorian Jones coupled with a 77th minute try from lock Rynard Landman saw the men in red leave empty handed.

Fast forward to the following September and Munster very nearly made it two losses on the bounce in Newport. In the final play of the game, Dragons worked up a head of steam through their maul and bulldozed into the 22 with the tryline at their mercy. Had they marched on it was a definite try, but for some reason opted to go wide and the chance went a begging. Hence victory was Munster’s.

The events of earlier this season are still fresh in the mind of Erasmus.

“Dragons are a very good team. Even when we had our internationals playing for us in the last away game against them, I can still remember the last lineout maul where they were all over us. They could have scored that last maul and we would have lost the game. They wouldn’t be a team that lose a lot of international players right now so it will be a good challenge. For us, this is a block of games where we have to do without a lot of international players either with the U20s or playing for the senior Ireland team against Italy this weekend so we are up against a tough, gutsy team without a lot of changes, so it will be tough.”

Start your weekend cheering on Munster under Friday-Night-Lights, plus supporters can avail of FREE PARKING in the Black Ash Park and Ride. Click here for full ticket and matchday information.