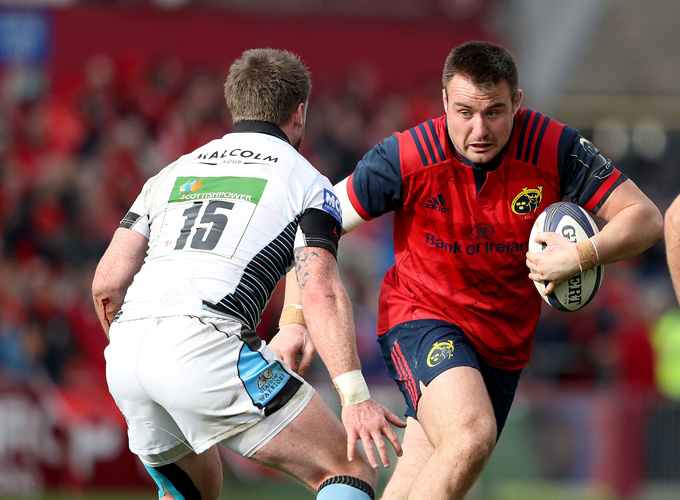 In what’s being billed as the biggest game of the season to date, Munster travel to face Glasgow Warriors in round 5 of the European Champions Cup this Saturday with both sides vying for a place in the knock out stages.

Should Munster win this weekend they will make it through to the Champions Cup quarter finals for the 16th time in 22 seasons. Thoughts of securing a home quarter final would then come into play as Munster welcome Racing 92 to Thomond Park the following weekend.

For Warriors, nothing less than a win will do as they bid to reach the knock out stages for the first time in their history.

The men in red enter this weekend’s proceedings having won eleven of their last twelve games and their 32-7 defeat of Racing in Paris saw them leapfrog Glasgow at the top of Pool 1. The two-time winners Munster have conceded just 42 points this season, fewer than any other side and are also the only team to have conceded less than one try per game on average (three in four games).

Munster’s drubbing of the French champions may have been impressive, but so too was Warriors’ 29-15 demolition of Cardiff in the Guinness PRO12 on Saturday. Scoring a brace of tries while deputising for Lions contender Stuart Hogg in the win, Peter Murchie knows the significance of this weekend’s game to the ambitions of the Glasgow outfit.

“We looked at the three-week period starting with Cardiff and ending with the two Champions Cup matches and said it could totally decide the end to our season.

“If we hadn't beaten Cardiff we'd have been under massive pressure in the PRO12.

“Now with these next two games we've got a chance to qualify from our group. If we beat Munster then Leicester, we'll make the quarters.

“It's a massive game. They'll (Munster) come flying out at us. We've got to be more up for it than them. It's going to take our best performance of the season.”

Either way, this game will be played on a knife edge. Munster have averaged more turnovers won per game (10) than any other side in the campaign while Glasgow have conceded the joint fewest turnovers of any side on average (11 per game).

While Erasmus' men may be in the driving seat of Pool 1, a win this weekend is indeed a big ask, especially at a ground where Glasgow have scored 130 points in their last four home games, winning every time and conceding just 31 in reply. The Scotsmen are now going in search of a third consecutive Champions Cup victory for the first time since 2011.

Warriors may have made peace with the heavy loss they shifted to Munster in the immediate aftermath of Anthony Foley’s passing – Simon Zebo himself tweeting, ‘No team in the world would have beaten us that day with that support from the fans and Axel looking down on us’ – but the hosts will be out to avenge Munster’s last gasp win in December where Ian Keatley kicked a winning dropgoal on the 76th minute.

Further motivation will be their desire to create European history with Gregor Townsend – the man who guided them to their first Guinness PRO12 title in 2015 – before he leaves to assume the role of Scotland Head Coach next season. The Warriors boss spoke with media this week.

“The Cardiff win felt like a performance we’re very much capable of but there are still areas to improve.

“In defence we will need to work harder because we did concede a few line breaks. Munster will come at us with ball in hand, they are very physical.

“It will be a real test of how we deal with their high balls and their set piece challenge. We will have to be better if we want to win that game.”

In terms of players to watch, Warriors centre Mark Bennett has averaged an impressive 14.9 metres per carry so far this season, while Munster talisman CJ Stander has made 15 more carries (69) than any other player in the competition, and is one of 12 players to play every minute of the opening four rounds.

The number 8 met with media in Limerick this week, “It just excites me the next few games, these are the games you prepare for and you look forward to as a youngster, and, yeah, it is going to be tough, I'm not going to lie about it, but it's exciting you know, you have to test yourself week in, week out, you have to be consistent and pitch up.

“Because if you don't pitch up, in a European game or a Test match, you're going to be shown your weaknesses.

“I'd normally say you take it week by week, but when you get two weeks like this when you get so much on the line it's the biggest game of the season so far.”

This game will be televised on Sky Sports.