VIDEO: 50 And Counting For Zebo 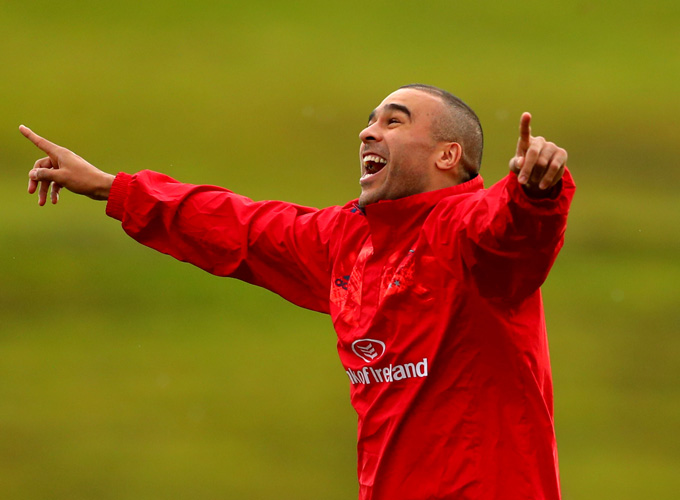 Becoming the first player in history to reach a half century of tries for Munster, we look back at some of Simon Zebo’s most memorable tries in the red jersey, 32 of which have come in the Guinness PRO12 with a further 18 in European Rugby’s top flight competition, the Champions Cup.

In crossing for the opening try – and his 50th – away to Racing on Sunday, the fullback also scored Munster’s 400th try in Europe with the province becoming just the third side to do so alongside Toulouse and Leicester Tigers.

Back in 2011, not long after turning 21, Zebo had cause for celebration when he scored his first Munster try in a man of the match performance away to Scarlets that April. And what a pivotal score it turned out to be. Exemplifying all of the Corkman’s speed, skill and exuberance, Zebo notched the crucial score when he pounced on a loose ball in the 68th minute and kicked downfield, controlled and scored the try that separated the sides at the final whistle. It was a result that secured Munster a home semi-final in what turned out to be a victorious Magners League campaign.

From there the speedster has never looked back and burst onto the European scene the following season where he famously scored a hat-trick of tries away to Northampton Saints as Munster booked a place in the 2012 Heineken Cup quarter-finals.

Hat-tricks would also follow against Racing Metro in 2013 and Zebre in 2014 while the gifted finisher has bagged no less than four braces, and all by the age of just 26.

It’s no surprise then that the Cork Con clubman has been Munster’s top try scorer in four of the past five seasons and is hot on the heels of Ronan O’Mahony for this season’s honours – O’Mahony currently has 6 with Zebo, Jaco Taute and Andrew Conway trailing on 5 each.

For so long Munster’s all-time record try scorer, Anthony Horgan had his record of 43 tries equalled in style by Zebo during last season’s Champions Cup clash with Stade Francais at Thomond Park. Attacking off a lineout, Ian Keatley opportunistically kicked over the Frenchmen’s defence for the oncoming Zebo who put on the afterburners to touch down under the posts.

‘Hoggy’ and ‘Zeebs’ wouldn’t share the spoils for long as the following March against Zebre, Darren Sweetnam did well in drawing the defence before popping to Zebo who left the Italians in his wake as he raced in to become Munster’s all-time record try scorer. It was one of two tries for the academy graduate on a night that also saw the province record their biggest winning margin in PRO12 history – defeating Zebre 47-0.

50 tries and counting. Here are just a few of the Munsterman’s standout tries…