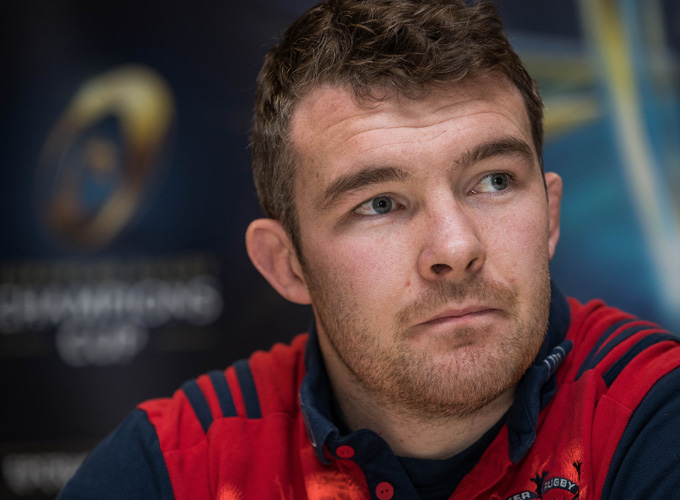 Despite making eleven changes, Munster recorded their first away win in three years to Guinness PRO 12 champions Connacht last weekend, a feat which Peter O’Mahony says is down in no small part to the role of the Greencore Munster Academy.

No less than eleven Greencore Munster Academy graduates were featured in the matchday 23 at the Sportsground with current members Dan Goggin and Conor Oliver making their seventh and sixth appearances of the season respectively. While a number of shrewd overseas signings have also bolstered the squad – Jaco Taute and Jean Kleyn to name a couple – O’Mahony feels it’s important not to underestimate the positive role of the Munster Academy at present.

“It’s something we’ve been working hard on and I think massive credit goes to the academy for producing the players who have really stepped up. There is big competition and the guys who are in the so-called starting XV now have a tough job to keep their place. That can do nothing other than good for the squad and the Academy are driving that.”

The Munster squad captain was speaking in advance of Munster’s Champions Cup trip to Racing 92 on Saturday. Despite finishing out last season as Top14 winners and Champions Cup runners up, Laurent Labit’s side have struggled to replicate the heights of 15/16, especially on the road where they have recorded just one win in the league. Failure to pick up a single championship point in Europe to date has all but ruled the Frenchmen out of the knock out stages but O’Mahony pities the fool that thinks Racing will give it any less gusto on Saturday.

“Racing are a hugely physical side and have some quality on paper as well and given their standing in both competitions they’ll be looking to put in a huge performance this weekend.

“We’re preparing for the best side that they can put out and for a big performance also. You don’t have to look too hard to see that they are a very proud team, especially so at home where they will want to excite their home supporters.”

In what’s sure to be an emotionally charged trip, Munster make their first journey to Paris since the passing of Head Coach Anthony Foley in the French capital in October.

“It’s never at the back of our mind on any week, it’s at the forefront. Everything Axel brought in his coaching résumé is stamped all over what we are doing now and we talk about it every week in most meetings. It’s not going to be any different this week.”

Suffering an agonising last gasp Champions Cup defeat away to Leicester Tigers in the middle of December, Munster bounced back well to remain unbeaten over the festive period against last season’s PRO12 runners up and champions.

“It (Leinster) was a good win, massively physical – the most physical and fastest game we’ve played all year. It was important for us to put in a performance like that at home and get the five points also to keep the table ticking over.

“Last week also (against Connacht), to get a win away from home at a place that’s very tough to go in terrible conditions rounded off a very good two weeks for us. Ian Keatley ran they game very well and our kicking was good. Plus his kicking off the tee was immaculate also and it was a super performance from him.

“But everything about being top of the Guinness PRO12 goes to the back of the thought process now and with Racing on the horizon it’s hard to be looking back, instead we are firmly focused on going to Paris this weekend and putting a big week down in training.”

In what could make or break Munster’s European season, the upcoming trio of games sees Munster face Racing away and home respectively with a trip to one of the best attacking sides in Europe, Glasgow Warriors, sandwiched in between the Racing showdowns. Three-from-three here is a massive ask for any club in world rugby with O’Mahony and his men taking the pragmatic approach.

“Certainly you can’t think of all three. Just take it game by game and Racing are first up. Anywhere you go in France, it’s always very tough to play and get a win, let alone against a side with the quality of Racing.”

This game will be broadcast on Sky Sports.