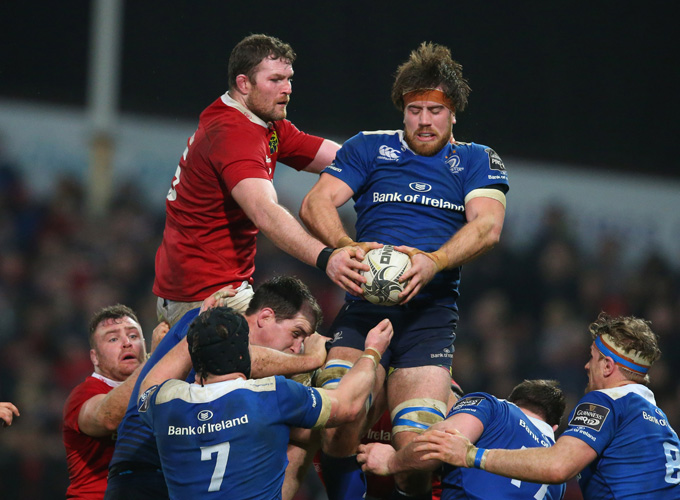 The Championship’s top-two sides, a record PRO12 attendance in Thomond Park, and Munster out to avenge three losses on the bounce to their fiercest rivals Leinster. The scene is set for one massive Christmas cracker on St Stephen’s Day.

Thomond Park has proved a happy hunting ground for Munster in 2016 having won every game at the Limerick venue since, coincidentally, Leinster beat them there last December. Achieving the season’s double over the Blues in 2014/15, Leinster returned the favour to Munster last season and drew first blood in the current campaign with a 25-14 win over the Munstermen at the Aviva Stadium in October. Basic defensive errors coupled with Munster’s inability to finish off a number of well worked opportunities were the difference on the day – all fixable chinks in the armour that Munster have subsequently ironed out in recent rounds.

Saturday’s loss away to Leicester Tigers brought to an end a seven-game winning streak across all competitions for Rassie Erasmus’ charges in which they recorded comprehensive wins over Ospreys and Leicester Tigers (home encounter), keeping both sides scoreless in the PRO12 and Champions Cup respectively.

Leinster too have enjoyed a rich vein of form and despite recent injuries to the likes of Johnny Sexton, Joey Carbery and Rob Kearney have made excellent use of strength in depth in most recently recording back-to-back bonus point wins over Northampton Saints, running in seven tries in the latter encounter.

In terms of the current PRO12 campaign and after ten rounds played, both Munster and Leinster have won eight games and scored 34 tries a piece. However Munster hold the best defensive record in the Championship – conceding just 15 tries as opposed to 24 for Leinster – and as a consequence a better points difference keeps them ahead of their eastern rivals at the summit of the table.

The buzz and anticipation for Monday’s game is also reflected amongst supporters with a record 26,200 fans set to flock to Thomond Park for the annual festive encounter, setting a new attendance record for a PRO12 game in Limerick.

‘You want to beat your friends’ is a phase often uttered by players from both camps in the lead up to interprovincial derbies and no doubt the allegiances and friendships formed in the green jersey will be parked for 80 minutes as red and blue do battle in the cauldron of what’s sure to be another stirring atmosphere in Thomond Park.

Irish international matchups aside, two key men to watch in this round 11 clash are Tyler Bleyendaal (57 points) and Isa Nacewa (64) who are among the top scorers in the Championship while they also boast near identical kicking percentages – Bleyendaal 83% and Nacewa 84%.

The Leinstermen have played two matches in 2016 away to fellow Irish provinces, losing both and failing to score a try, at Connacht in March and at Ulster in April, a trend Erasmus’ men would love to continue on Monday before hitting the road to current champions Connacht the following weekend.