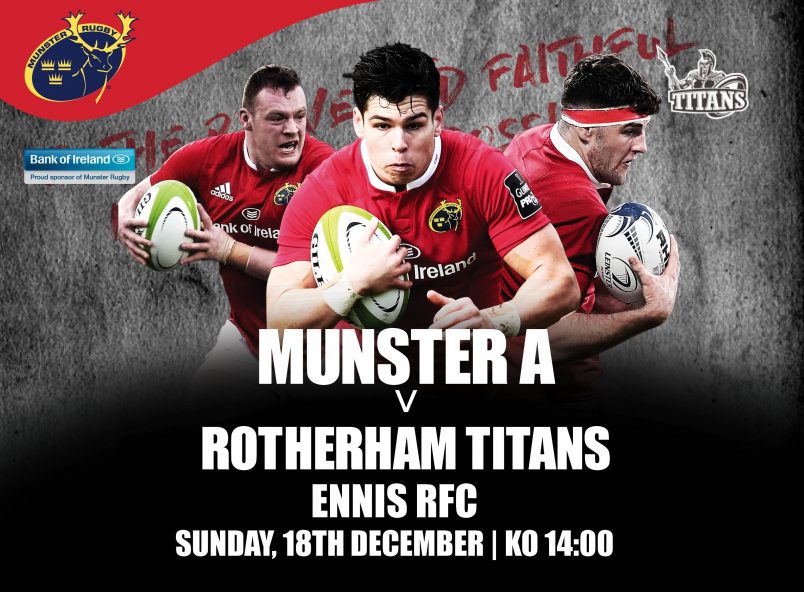 In hosting the tournament at different stadiums and clubs around the province, this will be the first time Munster A will play a B&I Cup fixture in Clare.

On reviewing his side's performance at Clifton Lane in Munster A's 35-24 victory against Rotherham last week, Head Coach Peter Malone said: “I think what was really pleasing from last weekend was the way we dug out the win, when down to 13 men with 10 or 15 minutes to go, it was great to finish it off.

“We wouldn’t have been overly happy with the discipline during the game so we’ve looked at that this week and we’ll hope to correct it come Sunday.

“It was a big learning curve for some of our younger players and I think they really stood up well. With a good pack on paper, including 3 internationals, it was important that these guys backed it up, and that’s what they did. Senior players such as Robin Copeland, Dave Foley and James Cronin, and younger players like Vincent O’Brien and Evan Mintern, who play for Cork Con in the AIL, all fronted up.

“They had an opportunity to show Rassie, 'we’re here and we’re putting our hand up', and they’ll get another opportunity to do that again on Sunday.”

On the selection front for this weekend's return fixture, Malone noted: “We hope to have something similar depending on what Rassie goes with for his senior selection, and with obvious replacements for Sean O’Connor and Alex Wootton, who are out with injuries.

“The senior and ‘A’ pack have really being going head to head during training so it is hugely competitive at the moment and I’m sure there are a number of selection headaches each week.

“This season the players have been playing more rugby, and that’s coming across on the pitch. It’s down to our injury profile which is better this year so far and players are getting that crucial game-time with their clubs, senior players and academy players, and it has been really postitive.”

Looking ahead to Sunday's encounter, the Munster A Head Coach added: “We are looking forward to playing the return game in Ennis RFC. This is a great aspect of the competition, where we get to take our games around the province. We’ve had occasions where I’ve been to Midleton, Bandon, Clonmel, Tralee and now we’re going to be in Ennis. Overall, it’s good for the development of the game.”

Tickets will be available to purchase at the gate.

View match highlights from the 35-24 win at Clifton Lane below.