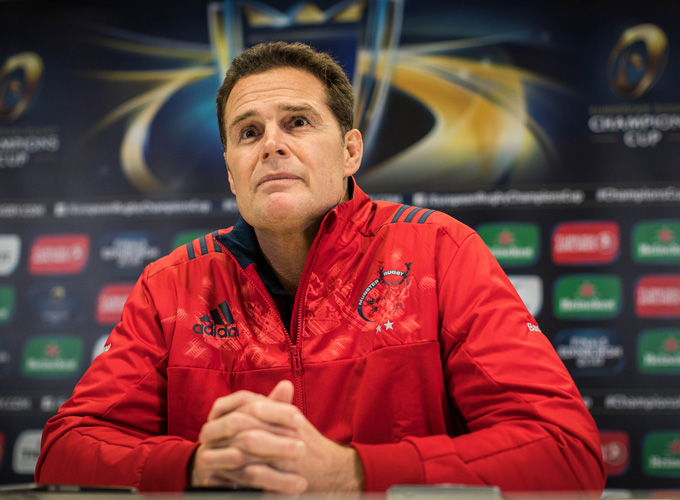 With Munster winning every competitive game during the international window, and playing a wonderful brand of rugby in the process, Director of Rugby Rassie Erasmus now has some tough selection choices to make as all internationals return to the provincial fold for Saturday’s European clash.

With Peter O’Mahony and Donnacha Ryan featuring in Friday night’s win over Glasgow, the last remaining returnees – Conor Murray, Simon Zebo, CJ Stander and Keith Earls – are all available for selection this weekend, leaving Erasmus with much to ponder, especially in the back three where Ronan O’Mahony, Darren Sweetnam and Andrew Conway have impressed in recent weeks.

“It is a headache for a coach but for a squad it’s good. For the players it’s good because we have to manage their game time and make sure everybody peaks at the right time. There are one or two guys coming back from injury that will be difficult to manage to get them the right amount of game time – a few of them may play with the ‘A’ side (away to Rotherham Titans) this weekend. In some positions we are doing great and are actually overstocked and in other positions we are one injury away from being really thin. We have a pretty solid squad but we know that one training session can change that but hopefully it stays the same.”

Involvement in both the Champions Cup and B&I Cup sees 45 players required for competitive action this weekend.  Just as well then that, barring a couple of injuries, the squad is in good stead as it heads into a crucial part of the season, one that begins with old rivals Leicester Tigers at 3.15 in Thomond Park on Saturday.

“Playing against Leicester, certainly everybody knows they beat us away and at home last year so they will be confident of beating us again. After studying them, they are tactically really smart and physically they are always really up for it so it’s a massive challenge.

“Every week there always seems to be a history with the opposition so I’m learning quickly about that. It’s another big one with a lot of history and interesting results and one-on-one battles against each other so I will be learning again this weekend.”

With well over 23,000 tickets now sold, Erasmus and his men are looking forward to more rapturous support from the stands and terraces of Thomond Park come kick-off on Saturday.

With Stand tickets now sold out, the last remaining Terrace tickets can be bought online here or from the Munster Rugby Ticket Offices at Thomond Park and Irish Independent Park – 061 421103.

All Hospitality for this game is now sold out.