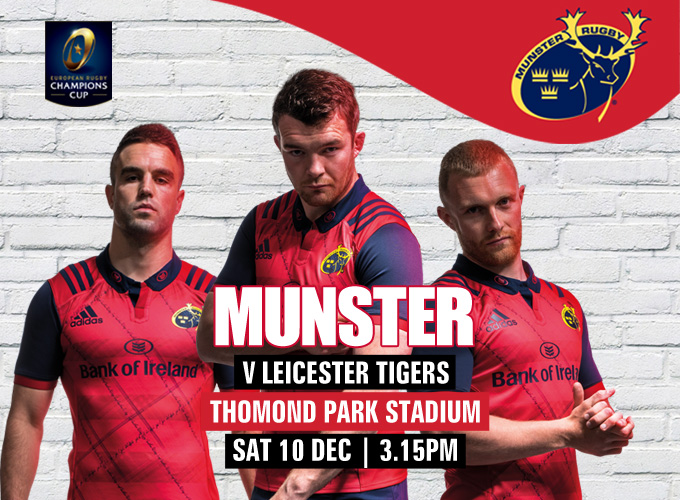 Add your voice to the rapturous Munster Roar in Thomond Park this Saturday. In this, the most anxiously anticipated game of the season so far, two giants of the European game and age old rivals, Munster and Leicester Tigers, will go toe-to-toe in round 3 of the Champions Cup at 3.15pm.

Until last season the spoils were evenly split between Munster and Leicester in Europe's premier competition. In fact, neither side had beaten the other home soil. That all changed last December however with Munster now out to avenge last season’s defeats at home and away.

Following comprehensive home wins against Glasgow Warriors, the Maori All Blacks and Ospreys of late, Munster will enter this weekend with good momentum, but arguably, face their stiffest challenge yet.

With over 23,000 tickets now sold, the scene set for another memorable European cauldron at Thomond Park, but the Men in Red will need every last ounce of your support against a side who enter this weekend as favourites and in a rich vein of form – winning their last three Aviva Premiership games over Northampton, Bristol and Harlequins while also seeing off Racing 92 in round 2 of the Champions Cup.

Let’s make it another memorable European game this weekend. What’s more, Students can now avail of €;10 tickets in the North and South terraces. Purchase tickets online and present valid student ID at the gate.

Secure your tickets online here or from the Munster Rugby Ticket Offices at Thomond Park and Irish Independent Park – 061 421103.

Christmas Match Packs
Simply select a minimum of three games and save 10% across the cost of all games. Match Packs can be bought online here.