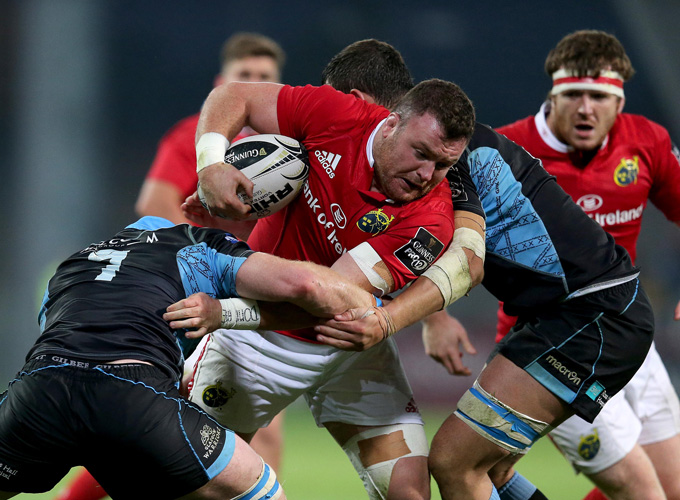 Round 10 is the last weekend of Guinness PRO12 action until the festive fixtures begin with Munster looking to consolidate top spot on the Championship table before returning to European action.

Rassie Erasmus’ men travel to Glasgow Warriors on Friday night but the Scotsmen will be keen to get their challenge back on track after losses to Scarlets and Ospreys. Munster have a seven-point lead on fifth-placed Warriors but the home team have not lost three in a row since the 2010/11 season and they are sure to be bolstered by the return of some of their Scotland internationals.

One such returning player could be British and Irish Lions contender Tommy Seymour who despite his recent international involvement remains the PRO12’s top try scorer so far this season, scoring seven tries in just six appearances, four of which came against Leinster in September.

With Stuart Hogg a world class attacker that strikes fear into the heart of any defence, another Warrior to be wary of is number 8 Ryan Wilson who was named man-of-the-match in Scotland’s final November Test where they overpowered Georgia 43-16.

While it remains to be seen who from Munster’s returning international contingent will be available for selection this week, Erasmus will find it hard to exclude from his matchday side any of those who lined out in red during the international window.

The back three in particular have impressed. Consistent and ever threatening, Darren Sweetnam has started the last eleven games, playing the full-80 in all bar one and scoring two league tries. While fellow winger Ronan O’Mahony and fullback Andrew Conway both bagged braces in the win over Treviso. O’Mahony also recorded the most clean breaks of round 9 with Conway making no less than 95 metres in attack.

Pivotal to Munster’s win over Treviso was man-of-the-match Tyler Bleyendaal. A man who Warriors with scrutinise at length this week, the New Zealander provided assists for two of Munster’s tries and added a further nine points from the boot. With a kicking success rate of 84%, Bleyendaal is third in the Championship’s kicking standings after Leinster’s Johnny Sexton and, interestingly, Glasgow’s Finn Russell (both 86%).

This weekend is a precarious fixture for Munster who could see either Ospreys or Leinster leapfrog them into top spot given that the two sides play at home this weekend. That said, the men in red hold the better attacking and defensive record over their hosts and will be out redress a win/loss ratio that currently favours Gregor Townsend’s men. The sides’ last seven PRO12 meetings have produced just two Munster victories whilst the Munstermen’s only previous victory at Scotstoun came in October 2013.