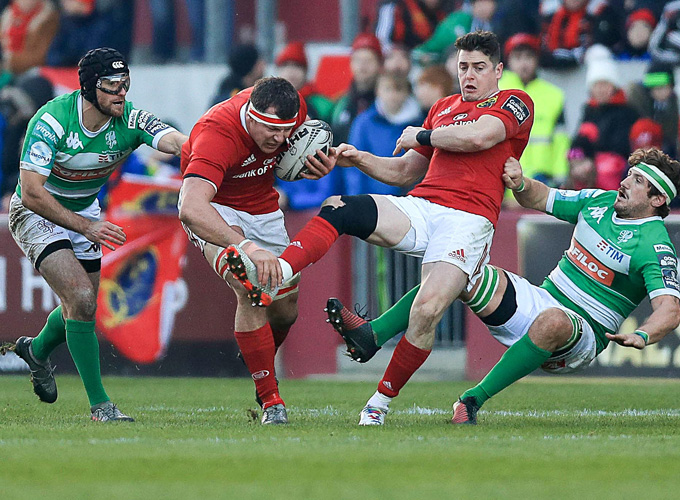 See the action shots as Munster ran in seven tries against Treviso to claim top spot on the Guinness PRO12 table with nine rounds played. Heading into two massive months of PRO12 and European action, Rassie Erasmus commented that Munster are ‘mentally in a good place’.

Braces from Andrew Conway and Ronan O’Mahony, first Munster tries for Darren O’Shea and Alex Wootton, and a Robin Copeland touchdown off the back of a dominant scrum saw Munster’s cohesive team effort hand Treviso a 46-3 drubbing.  Tyler Bleyendaal again made his mark, a key component in a number of the afternoon’s tries, he added a further nine points from the boot and was named the Guinness PRO12 Man of the Match.

Speaking after the game, Director of Rugby Rassie Erasmus commented, “I'd be lying if I say we're not mentally in a good place. I think I was honest after the game against Cardiff, when I said we were so bad in that specific game, almost giving up.

“Then we had that sluggish game where it took about two hours to play. We got through those frustrating times but now we are in a good place.

“We're going to play them – Glasgow – four times I think in the next two or three months.  We've seen what they did to Leicester four weeks ago. It's such a great challenge but it can be seen as daunting and a nice battle but definitely, definitely a tough one.”

With further internationals to return to the province following the completion of the November Guinness Series, and given the excellent performances of those that stepped up in the red jersey in their absence, the Munster boss has tough, but welcomed, selection decisions to make in the coming weeks.

“There will be a lot of decision making around team selection”, acknowledged Erasmus. “We are always moaning about the rich clubs having all the money and all the players so when for once we get into a position where we have good options , we must enjoy the moment and make the right selections and give all the guys motivation. It’s a nice headache to have.”