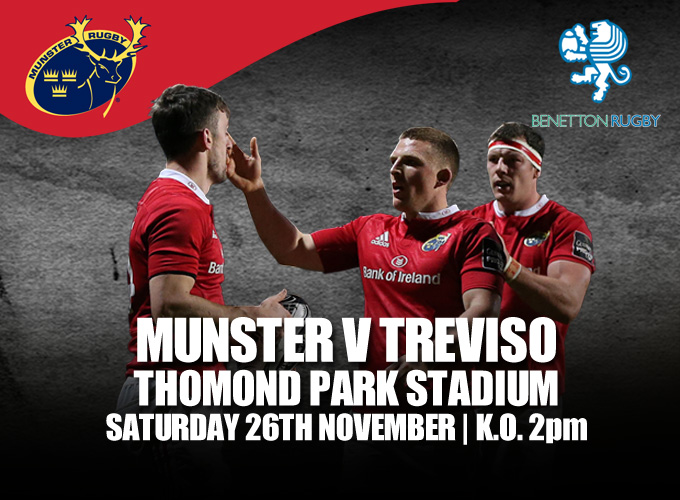 While fiercest rivals Leinster sit pretty at the top of the Guinness PRO12 standings, it’s Munster who head up a chasing pack that includes Ospreys, Glasgow, Ulster and Scarlets as the men in red welcome Treviso to Thomond Park this Saturday at 2pm.

Second meets twelfth on the PRO12 table when Munster and Treviso go toe-toe in this round 8 encounter and despite the Italians only winning one game in the current campaign, just lately their form has enjoyed somewhat of a revival. Enjoying success over Newport-Gwent Dragons in September, the Italians almost made it a Welsh double in their last outing.

Away to Cardiff Blues, Treviso crossed for four tries – through Dean Budd, Alberto Sgarbi, Michael Tagicakibau and Abraham Steyn – before a late Willis Halaholo try and Steve Shingler snatched the spoils for the hosts.

A couple of costly errors were the difference on the night, an overthrow at lineout time allowing Cardiff’s quick hands find Halaholo who took back the lead before further ill-discipline allowed Shingler put the final nail in the coffin with a kick for three on 76 minutes.

No doubt the Italians will not want to repeat the same mistakes this weekend, especially against a Munster side who scored five tries against the in-form Ospreys in round 8 and have the deadly boot of Tyler Bleyendaal in their arsenal, the New Zealander kicking 18 from 19 conversions and 4 from 6 penalties so far this campaign.

If Munster stay true to recent form, penalties should be hard to come by also. The province are the only side in the PRO12 not to have conceded a yellow card this season with Treviso seeing five players enjoy spells in the bin thus far.

One to watch from the Trevsio ranks is without doubt Kiwi native Dean Budd. A dynamic openside flanker, complimenting his physicality is an excellent pair of hands and an ability to play the ball in the tackle. Bagging a try in the aforementioned clash in Cardiff, the 30-year-old was one of the Championship’s leading offloaders in round 8.

Another is out half Ian McKinley who made it a clean sweep in the conversion stakes in Wales. The former Leinster player will no doubt have Treviso well versed in the Irish psyche before this weekend’s arrival in Limerick.

Unbeaten in their last four games across all competitions, including an inspired and historic win over the Maori All Blacks, Munster carry both confidence and momentum into Saturday’s encounter.

Sure to be earmarked by Treviso as potential threats are the likes of Ronan O’Mahony and Jack O’Donoghue, the former making the most clean breaks in the entirety of round 8 while the latter has consistently proven himself as one of the Championship’s top carriers.

Munster’s solitary defeat in any competition since September was 14-25 to Leinster at Aviva Stadium in round 6 while Rassie Erasmus’ charges are undefeated in any tournament at Thomond Park since Leinster were the visitors last Christmas.