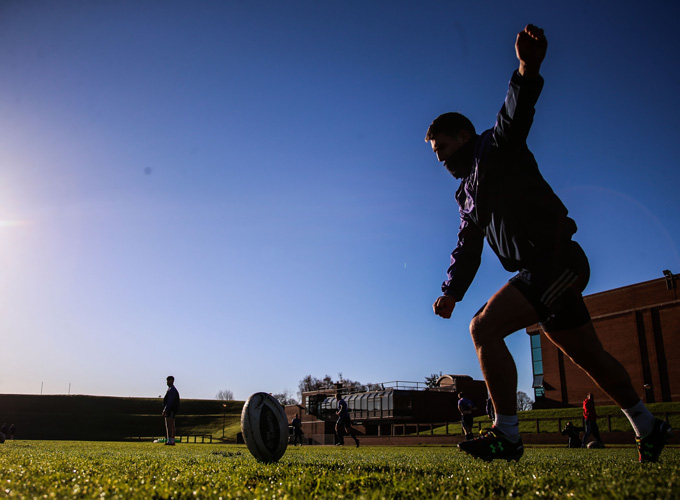 Fresh and crisp conditions greeted the squad as the stepped up Treviso preparations in UL with a number of returning internationals taking part in today’s session. We go behind the scenes to give you the latest training shots and catch up with Director of Rugby Rassie Erasmus.

Despite Munster claiming the spoils both home and away in the PRO12 last season, less than a score separated the sides in each encounter. Underestimate Treviso and do so at your peril is the attitude of Erasmus heading into this weekend’s round 9 duel.

“We are playing at home which helps, but the danger of playing against a side like Treviso is that they don’t have a lot to lose – it’s shackles off and that makes them dangerous. They’ll play without fear and when things go their way they’ll get their tales up. Individual players who you mightn’t know that well are potentially wonderful players and because you don’t play or see them regularly you can run the risk of underestimating them.

“I know they are coached really well. Marius Goosen was both my teammate and roommate at one stage with the Springboks and South Africa A. He was also involved with Italy as one of the assistant coaches in their win over the Springboks last weekend. I know what a hard worker he is and we are definitely not surprised by how good they can be. If you look at their last game (against Cardiff) there was only six points in it and they could have won that game.”

Munster enter this weekend off the back of four consecutive victories, and while consistency had been somewhat lacking earlier in the season, Erasmus is confident his charges have turned a corner and are on the right path.

“It’s nice to get on a bit of a roll. Early in the season we had a good win in Scarlets before a lacklustre performance against Cardiff in Cork. There was another bit of a roll before Leinster was another disappointing performance. We’re getting there, a bit off from where we want to be but are going in the right direction. The players accept the responsibility of trying to improve every single training session and that helps. At the end of the day, results shouldn’t dampen your way of training. The result will come if you train well and we are training well at the moment.”

Treviso kicks off what will be a hectic – to put it mildly – couple of months for Erasmus and his squad.

“There’s Glasgow and Leinster to come and then you add the European games into the mix, Leicester back-to-back in December before Racing almost back-to-back in January. It’s a tough nine weeks ahead but that’s the game we are in, it’s the same for all teams so we can’t complain.

“Playing games at Christmas is something new for Jacques (Nienaber) and me. Normally [in South Africa] November and December was our off-season and when we went on holiday. Now it’s one of the busiest and most critical times of the season.”

Catching Up With Sammy Arnold