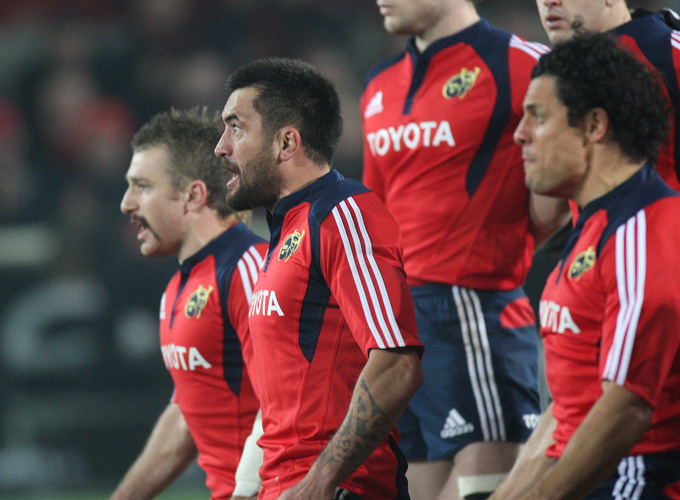 The special guest speaker for Friday night’s pre-match hospitality, former centre Rua Tipoki discusses his enduring passion for both Munster and the Maori All Blacks and his excitement at returning to Thomond Park for the first time since completing his time with the province.

Click here if you missed Part 1 of ‘The Return of Rua’.

Emerging from the Munster line-up alongside Mafi, Doug Howlett and Jeremy Manning to challenge the Haka of the mighty All Blacks on a momentous night at Thomond Park in 2008, this was not the first time Tipoki performed the traditional war cry on a world stage, doing so many times with the New Zealand Maori (now Maori All Blacks). However this one was different, and cannot but standout as a spine-tingling memory in both his mind and those of fans. It turns out Rua didn’t just partake, but was one of those who spearheaded the idea.

“It was something Frankie (Sheehan) and Jerry Holland (then Team Manager) asked would I consider doing for the team back when the game was first confirmed, almost a year before. I asked the boys if they all wanted to take part, some were keen but then Strings (Peter Stringer) said he couldn’t dance and would be all out of time. Half were in, half were out so it ended up just being the kiwi boys. It was pretty nerve-wracking and I didn’t want to do it unless our fans, the people who the team meant a lot to, wanted us to do it. Everyone seemed keen and we went for it. Now that it’s part of Munster Rugby history I feel really privileged to have been part of it.”

With the deep brotherhood that’s associated with the Munster dressing room, it’s no surprise that Rua left Ireland with friends for life, perhaps none more so than Ronan O’Gara. The Munster playmaker even named one of his children Rua. Mere coincidence or a gesture to a deep friendship?

“I probably had some foot in it alright but it’s also a reference to his love of that special red jersey. So while I definitely claim it, I think there’s a few different references in there. ROG is a man I have so much respect for as well as Paulie and the rest of the guys in that team, but particularly ROG. I played outside some of the best fly halves in the world, the likes of Carlos Spencer and Dan Carter. I didn’t hit those guys when they were at their peak but I got to play outside ROG at his best and it just does wonders for your game as a midfielder when you’ve got someone like that. It’s no secret to any Munster fan, when ROG was on, Munster were almost unbeatable.

“Frankie (Sheehan), Quinny (Alan Quinlan), Hoggy (Anthony Horgan) and Doug (Howlett) on occasion are some of the guys that I keep in contact with and especially when I moved home it was very tough at first, I was almost homesick for Ireland and my friends there. But life moves on and you keep in touch a little. I’m starting to get into a bit of coaching now so you never know I might end up back in Munster in a different capacity.”

It’s been over seven years since Rua last experienced the buzz and excitement of a sold out Thomond Park. However Friday’s spectacle should be one worth waiting for.

“For the Maori team who will play in Thomond Park this week, it’s something that when they go home they will talk about it because I know when I first came here and played as a Munster player it was just amazing. The crowd, the respect they show the players and that special atmosphere is definitely something they would not have experienced before and something they will remember for a long time.

“This will be my first time back and it will be really great to catch up with the people who looked after us when we were in Munster. And especially with the sad news that we all had to endure with Axel’s passing, I’m really glad that I’m getting an opportunity to come back. I know Christian (Cullen) played over there also and it was hard on everyone that knew him down here being on the other side of the world. Time will heal but he is a massive loss.”