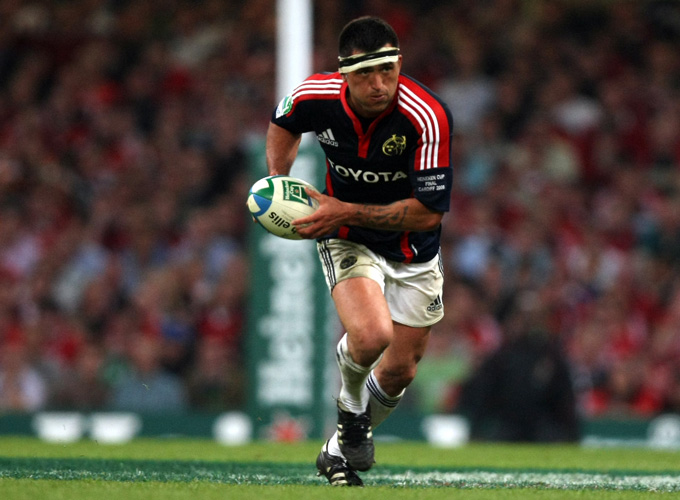 A fan favourite during an indelible two-season spell with Munster from 2007 to 2009, Friday night’s historic encounter sees Rua Tipoki return to Thomond Park for the first time since completing his time in the red jersey.

Prior to making the journey north where he will be special guest speaker during pre-match hospitality, we caught up with the former centre who discusses his enduring passion for both Munster and the Maori All Blacks and the inextricable links between him and both sides.

Representing the proud culture of New Zealand, and the first team to wear the famous black jersey, the Maoris’ (then called New Zealand Natives) first international victims were none other than Ireland in December 1888.  Fast forward to 2005 and Tipoki helped write another chapter in Maori history by shining in their first ever win over the British and Irish Lions.  Coincidentally, as Rua explains, it was on that night the seeds were sown for his eventual move to Munster a couple of seasons later.

“That day playing against the Lions was a big day for us as a Maori team had never beaten the Lions.  It was a big achievement and going up against the likes of Brian O’Driscoll, one of the greats and rated the best centre in the world at the time, was great.  To come through that game and have an ok performance was very special.

“ROG and Paul O’Connell had a chat with me after the game and asked if I was interested making a move.  I said I was really interested, my wife had some Irish heritage so we had always spoken about possibly moving there.  Things didn’t work out that time but a year or two later I got the opportunity after Deccie (Kidney) came over to have a watch of me when we (New Zealand Maori) played England in the Churchill Cup.  It took a while to get there but once I did, I didn’t look back.”

His time with the Maoris left a deep imprint on Rua – it was more than just playing for a team.  It was about culture, tradition and brotherhood.  Munster ticked all boxes, and once the offer came it was mostly an easy decision to move his life to the northern hemisphere.  Munster was in essence, his home away from home.

“Playing with the Maoris is really similar to Munster, it’s in our blood. I’ve been in professional teams in Super Rugby, ITM Cup and NPC where they spend a lot of money in trying to build team culture and build players understanding of the people and the team they are representing, but with the Maori team and Munster you don’t have that problem because there is such a strong tradition and history.  Every kid grows up dreaming of wearing that jersey one day.

“In Maori we have something called Whakapapa, a term for genealogy and every player is linked through their genealogy.  The idea is that everyone connects at some point in time through our ancestors and that there is a blood link between every single player in the team.  It is one of the strongest bonding points of the Maori team and players represent both their iwi (tribe) and family.”

Perhaps best remembered by the Munster faithful for that deceptive step and a formidable partnership with his fellow countryman Lifeimi Mafi in midfield, Tipoki made 29 appearances for the province, claimed Heineken Cup and Magners League titles, and created history as part of the Munster Haka when last a New Zealand side came to town.  So what for the man himself are his standout memories of the southern province?

“To tell you the truth, that whole Heineken Cup campaign of 2007/08.  It was just such an amazing journey.  The year before the lads fell short against Scarlets in the quarter final but that following year we overcame what was described as the ‘Pool of Death’ with Wasps who were reigning European and English champions, Clermont who were the Top 14 runners up and we met Scarlets again.

“Possibly the game that stands out the most is the game in Clermont.  Even though we lost we held on to deny them a bonus point and that got us through in the end.  I can remember ROG got his head stood on in the first few minutes and he got twenty-something stitches but he was so inspiring in how he stayed on and played.  That epitomised the grit of the team.

“That whole campaign we played the best teams, we came out of the Pool of Death, then faced Gloucester and Saracens who were running hot in England and went on to face the top French side Toulouse.  It was an amazing journey.”

Read ‘The Return of Rua – Part 2’ at MunsterRugby.ie tomorrow.