The Maori All Blacks Haka 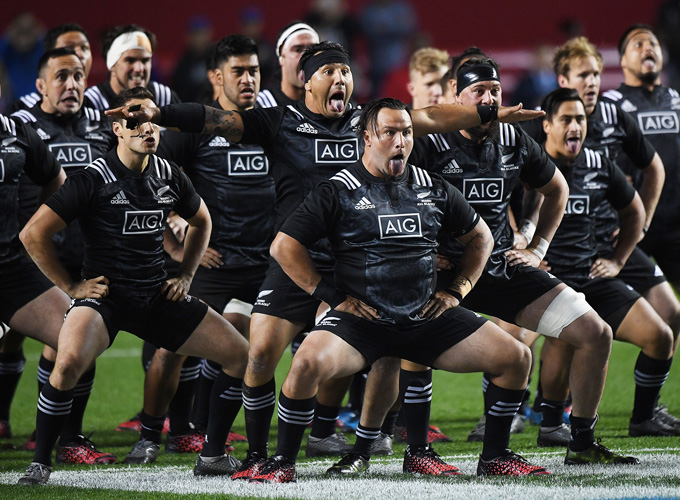 Before what promises to be one of the standout moments of Friday night’s proceedings at Thomond Park, the Maori All Blacks Haka, we look back at its origins and discover what it symbolises.

The first haka were created and performed by different Maori tribes as a war dance. It was performed for two reasons. Firstly, it was done to scare their opponents; the warriors would use aggressive facial expressions such as bulging eyes and poking of their tongues. They would grunt and cry in an intimidating way, while beating and waving their weapons. The second reason they did this was for their own morale; they believed that they were calling upon the god of war to help them win the battle.

Over time, the haka evolved and it came to be used for more than just battles. It became a way for communities to come together and it was a symbol for community and strength.

In New Zealand, you will find that the haka is performed for a lot of different reasons – weddings, funerals, local events and more. It is also performed for special guests as a sign of respect. It is not exclusive to Maori; anyone is welcome to perform a haka.

Origin of the Haka

According to Maori ethos, Tama-nui-to-ra, the Sun God, had two wives, Hine-raumati, the Summer maid, and Hine takurua, the Winter maid. The child born to him and Hine-raumati was Tane-rore, who is credited with the origin of the dance. Tane-rore is the trembling of the air as seen on the hot days of summer, and represented by the quivering of the hands in the dance.

Haka is the generic name for all Maori dance. Today, haka is defined as that part of the Maori dance repertoire where the men are to the fore with the women lending vocal support in the rear. Most haka seen today are haka taparahi, haka without weapons.

More than any aspect of Maori culture, this complex dance is an expression of the passion, vigour and identity of the race. Haka is not merely a pastime of the Maori but was also a custom of high social importance in the welcoming and entertainment of visitors. Tribal reputation rose and fell on their ability to perform the haka (Hamana Mahuika).

Haka reflected the concerns and issues of the time, of defiance and protest, of factual occurrences and events at any given time.

The Maori All Blacks Haka

The dramatic haka, Timatanga, that will be performed by the Maori All Blacks on Friday night was written especially for the team by the late team kaumatua (elder) Whetu Tipiwai. This special haka, tells the Maori story of the creation … from the void, the nothingness, the darkness to what we have today. It also tells of a gathering of young warriors, young chiefs, young rugby players who are making a statement and setting aims, objectives and strategies to achieve matauranga (knowledge), whanaunatanga (unity) and taumatatanga (excellence).

This is not only for the present but for the future of Maori rugby and each individual’s mana (prestige), whanau (family), hapu (sub-tribe) and iwi (tribe). This will increase their oranga (well-being), both wairua (spiritually), hinengaro (mentally) and tinana (physically).