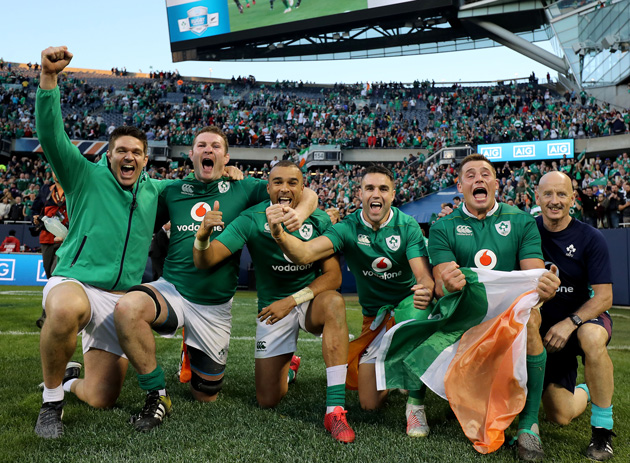 The weekend saw big wins in both the red of Munster and green of Ireland. In our latest photo galleries we look back at Munster’s comprehensive PRO12 win over Ospreys in Cork and showcase the action and reaction from Ireland’s historic first-time win over the All Blacks in Chicago.

Munster v Ospreys
Travelling to Cork as the leading try scorers of the PRO12 to date, and to a venue where they had won as recently as last season, Ospreys would have fancied their chances heading into the round 8 encounter. Not to be for the Welshmen however as they were met by a Munster side rich in form and determined to make home advantage count in front of a sell-out crowd at Irish Independent Park. Dave Kilcoyne and Darren Sweetnam crossed for opening half tries before O’Mahony, Kilcoyne again and Robin Copeland put Ospreys to the sword with three further second half tries, also rendering the visitors scoreless. 33-0 was the full time score.

Ireland v All Blacks
Irish fans travelled from home and all over America to witness history at a packed Soldier Field in Chicago where Ireland recorded their first ever win over the All Blacks after 111 years of trying. Munster’s Donnacha Ryan, CJ Stander, Conor Murray and Simon Zebo all started with Ireland poignantly forming a figure of 8 in memory of Anthony Foley as they faced the Haka. Stander, Murray and Zebo were among Ireland's try scorers in the pulsating 40-29 win, one that saw the world champions stage a massive comeback before Ireland found another gear to earn a deserved eleven point victory.