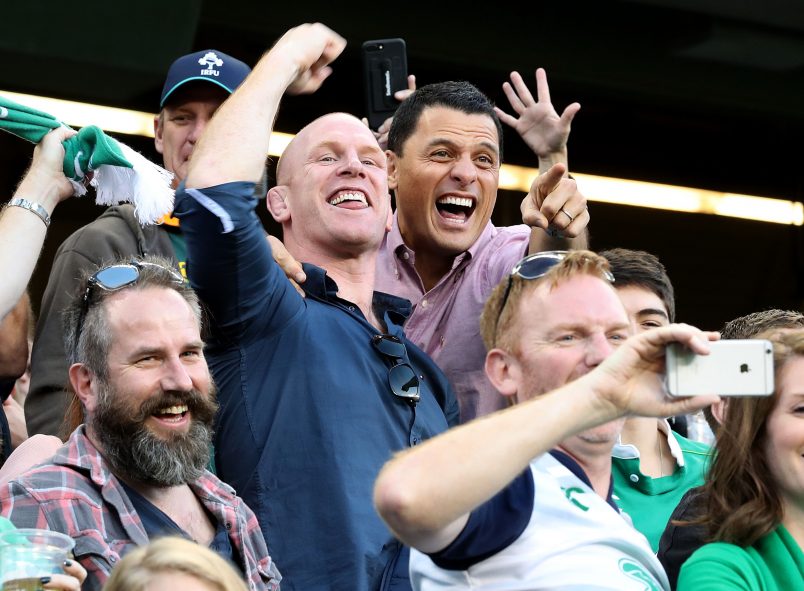 Even as the All Blacks’ leading try scorer of all time, Doug Howlett was delighted for the country he has called home for the last nine years as Ireland finally overcame world champions New Zealand in Chicago on Saturday.

Hat tip to Dan Sheridan of Inpho Photography for capturing the shot as he and Paul O’Connell lauded the Irish heroes from the stands of Soldier Field. Doug describes that precise moment.

“It was hard not to be thrilled forIreland, they deserved to win because of the way they played and I don’t think anybody can doubt that. It was mixed emotions for me I guess, it was the team that I grew up playing with versus some of my mates from the Irish team. There’s actually only one player from the current All Blacks, Jerome Kaino, who I played with. It was great to see my mates in the Irish team finally get a success against the All Blacks. I was watching it with Paul O’Connell and we were both going through the emotion, every moment, every impact meant something. It was a real Test match and great to be able to witness. The images of Paul and I were just special moments were we managed to catch the eye of some of our former Munster team-mates and it was just a fantastic occasion.”

Howlett’s allegiances will be torn more twice more this autumn – when Ireland and the All Blacks go toe-to-toe again in Saturday week’s rematch, and perhaps even more so when his beloved Munster play the Maori All Blacks for the first time this Friday night at Thomond Park.

“They (Maori All Blacks) have always been a most respected team, for a long time they were the B team to the All Blacks. Even this weekend there will be players hoping to impress for a chance to play in the All Black jersey so it’s that quality of player and that has always been the case. As well as that, they are a unique team in that they come together once a year and they play international teams and they have a wonderful track record, made so by their unique culture. When they come in they all buy into something and they go away and play international teams and come back with some great results.

“There’s no doubting their ability, a lot of these guys are just waiting for their opportunity to make the step into the All Black jersey and this is an opportunity to show what they can do so no doubt a dangerous, dangerous team.”

Friday’s game is the third international encounter to be held at Thomond Park since its redevelopment, the first of which featured Doug in the red of Munster against the All Blacks for whom he made 62 appearances and still remains the all-time record try scorer on 49 tries.

“One of the highlights of my career, playing against the All Blacks as a Munster man and there are similarities going into this weekend’s game. Not many of the internationals are available and that was exactly the way it was when we went into the All Blacks game and every man who put on the jersey that day played the game of their life and that’s what it’s going to take again.

“Sometimes, guys just need an opportunity and in an environment like that, in front of a full Thomond Park, playing against an international team, it’s going to be a great occasion.”