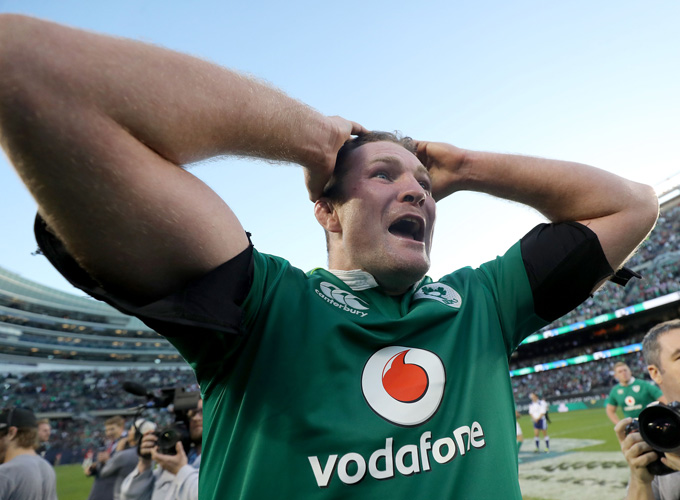 After 29 meetings and 111 years of trying, Ireland finally have a men’s senior international win over New Zealand to cherish with Munster’s CJ Stander, Conor Murray and Simon Zebo all crossing for tries in the 40-29 win at Soldier Field.

In total four Munster players lined out for Ireland, Donnacha Ryan also joining Stander, Murray and Zebo in the starting line-up and, in a touching tribute to Anthony Foley, the Munstermen stood to the fore as Ireland faced the Haka in a figure of 8 formation. The result sees Joe Schmidt's side join the Ireland Women (2014) and Ireland U20s (2016) in the history books with a fantastic five-try performance against the reigning World champions in Chicago.

Robbie Henshaw's 76th-minute try was the final nail in the All Blacks' coffin at the end of a spellbinding encounter that saw Ireland open up a 30-8 lead before the recent Rugby Championship winners staged a stirring comeback.

New Zealand, who had won their previous 18 Tests, showed their undoubted class with converted tries from TJ Perenara, Ben Smith and debutant Scott Barrett in a furiously competitive second half.

Suddenly, the margin was down to just four points (33-27) as Ireland – minus the injured Jonathan Sexton for the final quarter – came under further pressure in defence. Nerves were frayed as the tension brought back memories of the teams' 2013 clash in Dublin which ended in heart-breaking fashion for Ireland.

But there was only joy for Joe Schmidt's charges at the end of their 2016/17 season opener, a penalty from the outstanding Murray steadying the ship before Julian Savea was hounded into conceding a five-metre scrum and Jamie Heaslip linked with the onrushing Henshaw for the clinching score, converted by 21-year-old debutant Joey Carbery.

Despite the early setback of George Moala's fourth-minute try, the men in green were in full control of the scoreboard by half-time. The lineout was a real area of strength and Jordi Murphy's maul try, combined with Stander's 16th-minute effort after a jinking run from the lively Rob Kearney, left the All Blacks trailing 15-5.

Both touchdowns came while New Zealand prop Joe Moody was in the sin-bin for a tip tackle on Henshaw. Ireland's set piece strength and aggressive defence prevented Steve Hansen's men from building momentum and after Sexton cancelled out a Beauden Barrett penalty, his half-back partner Murray, as he has done so often for Munster this season, sniped around the side of a ruck for a 34th minute try that his performance deserved.

Murray had a huge influence on proceedings and extended his enviable try-scoring run to six in his last 11 Tests. He also got over the whitewash against the All Blacks in 2012 and 2013.

Murray's Munster colleague Zebo was another player to excel. Ireland's back-three all had their moments, full-back Kearney making some big first half plays, Andrew Trimble coming up with a couple of key tackles under immense pressure and Zebo finishing off a 48th minute try after a dominant Irish maul.

The Irish squad's collective effort, including the timely introductions of the likes of Cian Healy and Ultan Dillane and a big 56-minute shift from Josh van der Flier, who replaced knee injury victim Murphy, was simply supreme.

The statistics really back up what they have achieved – that long-awaited maiden win after 111 years, joining France and South Africa as the only teams to ever score 40 points against New Zealand in a Test, Ireland's biggest ever points total against the All Blacks, and it has been 12 full years since the Kiwis conceded so many points in an international.

There was definitely something in the water in the Windy City this week, Ireland's extraordinary triumph coming just a few days after Chicago's beloved Cubs won baseball's World Series for the first time in 108 years. Roll on the start of the GUINNESS Series in Dublin next week, but for now, it's time to party like it's the early 1900s! Speaking after the game Ireland Head Coach Joe Schmidt commented, “I really thought the players did themselves proud. To be fair, they did Axel proud and his family and they did their country proud. I think the supporters did well as well. The longer the game went, the more they got behind the team.”