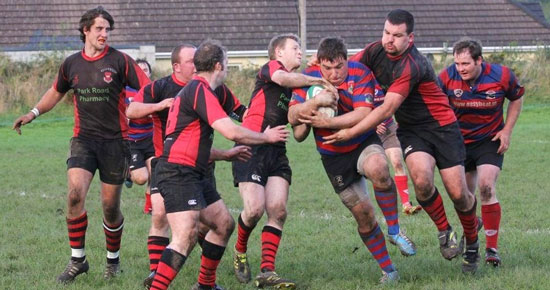 Mallow defeated Castleisland in the top game in Division Two and as a result are now the new Division Two leaders, a point ahead of Muskerry.

A penalty by Andy Cashman and a try by Dave Walsh had Mallow 8-6 ahead at half time, Connie Reynolds replied with two penalties for Castleisland. Cashman added three penalties in the second half to secure a vital victory for the North Cork side in their quest for promotion.

The game between Presentation and Killarney was postponed to the Rathuard pitch being unplayable.

Carrick-on-Suir have moved off the foot of the table after their 14-8 home win over Thurles. Two penalties from Charlie Boland had Carrick’ 6-3 ahead at half time. Owen Dwyer kicked a penalty for Thurles. A try by Joe Kelly put Thurles back in front but Boland replied with his third penalty and a try by Mick O’Grady secured the points for the home side.

In the other game in this Division Ennis recorded a maximum point victory at home to Dungarvan. Tries by Niall Nevin and Brian Dolan and a Dave Murphy penalty had Ennis 13-8 ahead at half time. Kevin Delahunty scored a try for the Waterford side and Seamus Keating added a penalty. Dolan and Patrick Harding scored second half tries for the Clare side and Murphy converted one. Cormac Condon replied with a try for Dungarvan and Keating converted and also added a penalty.

Kanturk will face Richmond in the final of the Munster Junior Clubs Challenge Cup after they overcame the challenge of Old Christians 21-10. Tries by Philippe Trippier and Brendan Kelleher both converted by Darragh Meade had Kanturk 14-3 ahead at half time. Stuart Lee kicked a penalty for the visitors. Dan McCabe added a third try for Kanturk and Meade converted and the Rathcooney side responded with a try from Rob Grey which Lee converted.