Darragh Hurley Back In The Fold 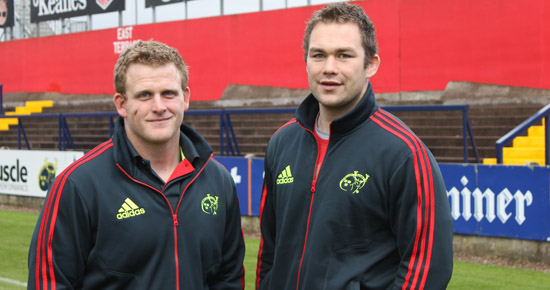 Former Munster prop Darragh Hurley, who due to injury was recently forced to retire from the professional game, is back in the fold as the new Cork Institute of Technology (CIT) Rugby Development Officer.

Darragh began his rugby career in his local club Kinsale RFC and later went on to play for his school CBC, Cork, where he achieved a Munster Schools Junior and Senior Cup title.

He has previously represented the CIT in rugby while studying Business Administration as a bursary student and in the same era was also involved with Munster Rugby as a professional player winning 37 caps since his debut in 2006.

Hurley joins former Munster and Connacht player Brendan O’Connor in the college’s rugby department where they are dedicating their experiences and knowledge in growing the sport.

To date O’Connor has made massive strides in the development of CIT College Rugby since his own appointment two year’s ago, when at the time the only competing team was a men’s freshers side.

CIT is also one of two training bases for the Munster professional team and as such rugby now enjoys a high profile on campus.

What is it like returning to the CIT in a working role?

“It’s very enjoyable so far, I have only recently taken up the post but I know the structure of college rugby since my playing days. I trained here also so I know a lot of the people already which has helped me settle into the job.”

Can you outline your day to day role at the CIT?

“My role is to look after players, teams and competitions and to make sure that all the administrative duties are up to date. A big part of the role is the recruitment of players and promotion of the game in the college for men and women which is the part of the job I find particularly enjoyable.”

“When I attended here as a student, the staff and lecturers accommodated me so well with combining my rugby and studies. It is not just about the elite players though, we at the college just really want to encourage participation, get young people out there and play matches. CIT want their students to have an outlet outside of study and it is my job to facilitate them at all levels.”

How are you finding the transition from your previous role as a professional rugby player?

“After I finished up I initially took some time out away from the game but after a couple of months I felt the bug coming back. Out of the blue an old lecturer of mine in CIT texted me about the job that was going as a rugby development officer. At that point I thought I was ready to go back into the rugby scene again so I applied for the job, got it and I am now delighted to continue being involved in the game.”

Is it hard watching your former colleagues train every day and not be a part of it?

“It is very difficult and it’s hard not to be envious when you see the young guys achieving so much recently, but at the same time I’m delighted to see them doing so well. When you are young I guess you think your rugby career is never going to end but that said I have had really exciting times which I will never forget.”

How do you compete with the other sports in the college?

“We share an office with the GAA and have a good working relationship with them. They share ideas with us and we share ideas with them, maybe fundraising for the club and things like that, so in fairness it’s about getting students participating in sport. Rugby is our thing but to be honest we just want to see young people out playing something.”

Do you help out with the coaching at CIT?

“All coaches are already in place but I will be ready to lend any assistance when required. Conor Twomey is the Head Coach of the College Seniors and hopefully he’ll be calling on me to help out.”

What Is Your Long Term Goal?

“When I finished up with rugby I was approached by Kinsale RFC to help out with their adult team. I have also recently helped out in Bandon Grammar School with their scrummaging clinic. I couldn’t believe how much I enjoyed coaching and I think it was a nice way to ease myself back into rugby . I really am enjoying helping out but at the moment I am also studying physical therapy and have another year or two to go. I’m keeping my options open and have a lot of time on my hands to decide where I will end up.”

What advice would you give to young people that aspire to becoming professional players?

“You have to enjoy it……..you know, realise that there is a great life for you in rugby if you really want it. Just push yourself hard enough and with a lot of dedication you’ll get there. It’s all about the extra work you put in I think that gets you to the top and makes you stand out from the other guys.”

What have been the highs and lows in your career?

"I think being forced to retire from rugby has to be the ultimate low for me, especially in the last month or two when I was finishing up and trying to deal with it. As for the highlight of my career, I think it was my first Heineken Cup cap in Cardiff at the Arms Park back in 2006/07. Playing in front of such a big crowd was unreal and I will never forget the support of the Munster crowd that day and indeed throughout my career."