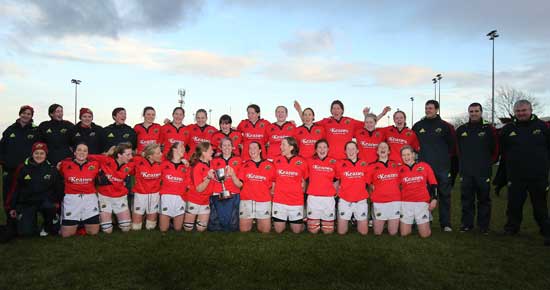 Both sides came into this game knowing that a win would ensure the title having each secured victories over both Connacht and Ulster. The game ended in a 15-12 win for the visitors and sees the trophy return south to Munster for the sixth time in seven years. The win reaffirms their position as the leading province in women’s rugby on this island.

The final game saw Munster get the first points on the board as Niamh Kavanagh touched down after 25 minutes. Leinster converted a try before half time which left them 7-5 up at the break but the second half was barely underway when Ashling Hutchins got in for a try on the right wing to take Munster three points ahead. Leinster nosed ahead shortly after however, until the 70 minute mark when Gillian Bourke got in for Munster’s third try. Great defensive work as the minutes counted down saw the game finish 15-12 to Munster and jubilant celebration from the team.

Munster travelled to Belfast in the first round of the championship, defeating Ulster 36-10 with Niamh Briggs scoring two tries and three conversions, Ashling Hutchins two tries, and tries also for Niamh Kavanagh and Anna Caplice.

In the second round, the Connacht Women travelled to Musgrave Park for a game that finished 24-3 to Munster. Anna Caplice, captain Heather O’Brien and Niamh Briggs were the try scorers on the day with Briggs adding a penalty and slotting over all three conversions.

As the championship trophy was presented to captain Heather O’Brien on Saturday, she commended Leinster for such a tough final contest, and said the celebrations at the final whistle showed just what this victory meant to the girls in red.

Munster Edged Out at Vicarage Road