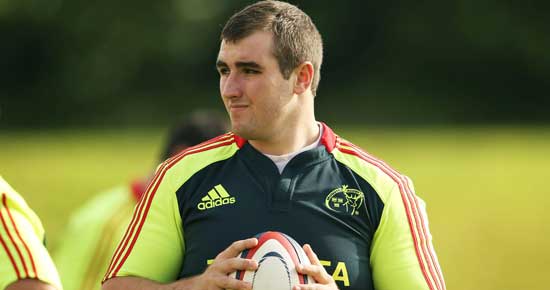 Elite Player Development Manager Peter Malone fills us in on the latest updates from the Munster Rugby Academy.

"Corey Hircock (ankle) is progressing better than we thought and hopefully he will be back in early January which is much better than expected because we thought he would have had to go for surgery which isn’t the case because he has rehabbed it so well.

Cian Bohane picked up a knee injury playing for Dolphin which was unfortunate timing for Cian because he had been going well for the A’s and was getting good game time. He’s now looking at the end of January or start of February for a return to training.

Darren Moroney (hamstring) had been out and is back fit, he lined out for UL Bohs in the Munster Senior Cup in November and he has been named in tomorrow night's A squad.

Shane Buckley picked up an ankle injury in the A game last weekend so he his out for a few weeks but we’ll have to see to what extent as we continue to assess his injury."

"Some guys got their opportunities and I think they took them. James Cronin got his first B&I Cup start at prop, he did well around the field, worked very hard and we scrummed reasonably well. The whole pack and James should be happy with that.

Two young back-rows got good game time, Jack O’Donoghue came on for Shane Buckley, he did very well and is still only 19 years of age but we were down a few back-rows so he took his opportunity.

Ryan Murphy played at 7 and impressed, showing the football he has gotten under his belt in the last year playing for Dolphin and he can be very happy with his day out against Rotherham."

"We’ll go with the same game plan but we’ll alter a few things. I expect them to come very hard at us as I think they were surprised by our scrum and our maul, so I imagine they’ll hit us hard in the opening 20 minutes.

We’ll play with the same philosophy as we do all the time, similar to the seniors, with a bit of width and pace but maybe we’ll tweak a few things here and there, and in attack."

"A few of the guys will be going into International camps, underage camps. The U19/U20/U18s Clubs and Schools camps are all taking place over Christmas so we’ve a good few guys going up to them. Academy and sub academy guys like Ryan Murphy, Sean McCarthy, Niall Horan, and Darren Sweetnam will probably join the U20s camp so there’s a good few guys involved.

There’s no club or A games until the 5th of January so the Academy players will take a well-deserved break over Christmas with a week off."

Changes For The B&I Side