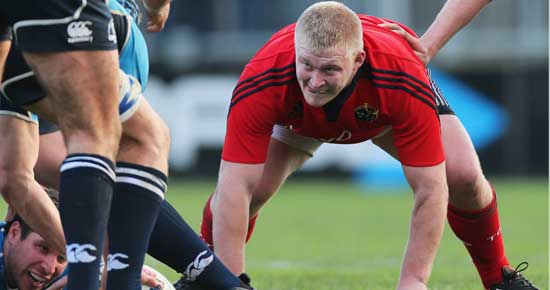 B&I Cup action returns to Musgrave Park this Friday night at 6.30pm when Munster A take on Rotherham Titans after a six day turn around from their bonus point 36-21 victory at Clifton Lane.

Munster moved to the top of Pool 7 following last weekend's win and are currently on 13 points, four points ahead of their upcoming opposition. Full league tables can be found here.

Prop John Ryan commenting on last weekend's result said "We knew we were in for a tough encounter, they were a point ahead of us in the group and they got a bonus point against Plymouth where we struggled against them."

"They are big, big boys and we just wanted to get our four points away so to get the bonus was great."

"Our backs and forwards were outsized, we were smaller but we just made our tackles and we were delighted with our scrum. After the first one we got a penalty off it and then we got a penalty try also but we should have backed it up more in the second half."

Looking to Friday night's return fixture Ryan added "We need to obviously do the same next week and we just can’t take anything for granted. We went out there and got the bonus point which we weren’t able to do against Aberavon and Plymouth, but they are a big carrying side so we just need to make the tackles and continue in that vein of form to make sure we get a positive result."

And calling on local support "It would be great to have a good home crowd behind us on Friday night, we’ll have family and friends there and hopefully more will come along to see us in action. Even over in Rotherham we had a sprinkling of Munster fans which was great to see and we could hear them at different times during the game."

Munster enjoyed a positive day of rugby with both sides returning the right results on Saturday and it'll be a case of same again please this weekend when Munster A line out against Rotherham on Friday night and Munster take on Saracens on Sunday. "We finished up the game on Saturday and went up to the airport to watch the seniors in action and we caught the whole game so it was great to see, and hopefully both sides can replicate the results again this weekend."