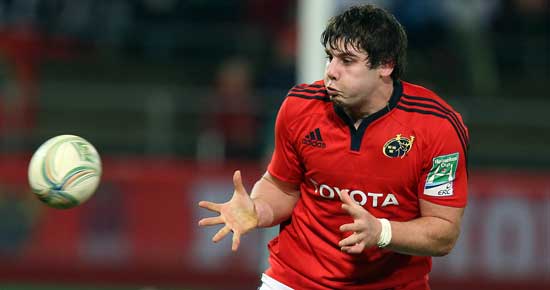 We catch up with Dave O’Callaghan after making his first Heineken Cup start against Saracens in Thomond Park on Saturday night.

O'Callaghan who came on as 63rd minute replacement for Paul O'Connell against Racing Metro in October made the step up for last weekend's round 3 game, starting against Saracens in Thomond Park.

"It was massive to start the game, you get the buzz of the crowd and you get the sense of the occasion. And against a team like Saracens it doesn’t come any bigger than that for me. It’s the biggest game I’ve played so far so the excitement was unreal."

"I was nervous but confident as well, we trained well during the week and we all knew our roles and we were all up for it, and when you hear the crowd like that it drives you on."

"It was something else, I’ve never experienced that before. It is what they say you know, the 16th man, and it’s absolutely like that. Especially as a forward, it's little battles, it’s a big hit or you clear a ruck and the crowd goes mad, any bit of physicality and they’re behind you."

"It was a real work rate performance from the whole pack and we all just dug in."

O'Callaghan didn't show any signs of nerves on the night as he came up against the experienced Saracens pack excelling in the lineout "You hear the roar of the crowd and at the time you don’t really take notice you just know that’s your job at that point of time, and it’s obviously good to help the team. It gives you confidence that that’s your level and you’re able to compete."

And now looking forward to next weekend's game and the possible chance to claim his second Heineken Cup start O'Callaghan said "With Saracens now at home we expect serious intensity out of them and it’s about bringing it again really, and bringing it even more so."

"We’ll be wary of them because they’re going to come out firing at home, with the crowd behind them. For us it’s bringing it up that step again, another level, and I’m sure we’ll do that."

"We’ll look to train like we did last week and really focus in on areas that mightn’t have gone to plan and also areas that did work well and improve on them again to make sure we’re flying it coming into Sunday!"