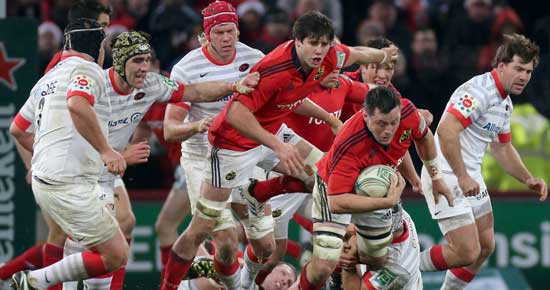 Munster have done what they set out to do first and foremost, getting the win in Thomond Park tonight against Saracens.

But what may prove crucial is a losing bonus point Saracens picked up in the 78th minute of the game when Farrell cleared his third penatly after missing on four attempts.

Ronan O'Gara was in kicking form slotting five out of five penalties and all of Munster's points.

Munster travel to Vicarage Road for the return leg on Sunday December 16th, where they will wear an exclusive one-off white jersey after broadcasters found that there was not sufficient difference between Munster's home (red) and alternate (dark navy) strip and that of Saracens home jersey.

Rob Penney commenting on Dave O'Callaghan and his first Heineken Cup start "He was terrific, his opening twenty minutes in particular, he was great."

Penney added "Saracens will go up another notch next week so we need to work on improvements this week and see what we can add to next week's fixture."