Starting On A Positive 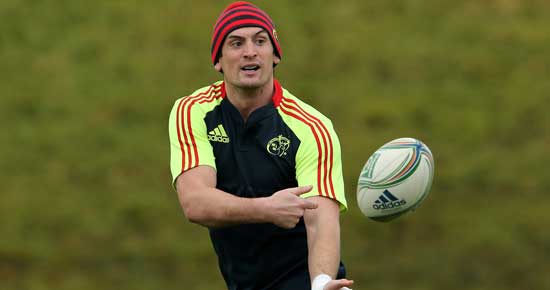 Munster commence their Heineken Cup back to back games against Saracens this Saturday in Thomond Park with an all-important home result needed with the away trip in Vicarage Road looming eight days later.

James Downey talks about the positive momentum built up after the Glasgow result, “I think with the win last week coming into this week it’s given us a big boost and I suppose we have to up our levels again coming into Heineken Cup. It’s a huge couple of weeks for the club and we just need to start off well at home.”

As the squad move from Rabo to Heineken Cup rugby the weekly preparations don’t deviate from the norm “I don’t think we change preparation too much, I think we need to do things the way we normally do and it is the hype and that sort of stuff that increases coming up to this. We know how important the next two weeks are but we just need to stay focused.”

“You can look at the footage on Saracens and prepare yourself but it comes down to how we play and we just need to look after that side of things.”

Downey can draw on his own experience from his Northampton days to pre-empt what’s in store, “They’ve a strong back three; they’re pretty strong all over really to be fair to them. They’ve a good pack and they are well drilled and know what they’re doing. I’ve played against them many times and I know the way they play as well.”

“I suppose with a couple of new signings they’ve expanded their game a little bit. They’re a quality side and they’ve some internationals coming back with a good buzz after beating the All Blacks so we’ll have to watch them carefully.”

Rotherham Next In The B&I Cup

Costello Takes His Side On A Road Trip