Rotherham Next In The B&I Cup 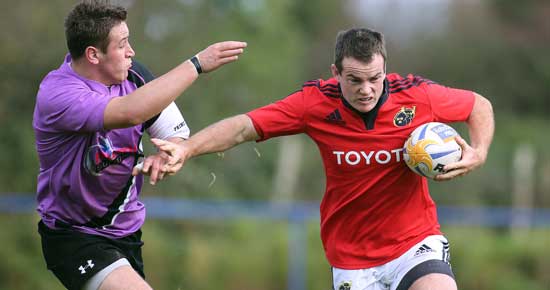 It’s not only the Heineken Cup squad in action this Saturday as Ian Costello’s Munster A side return to B&I Cup rugby when they travel to Clifton Lane for a 2pm ko against Rotherham Titans.

Both sides are undefeated at this stage and Rotherham currently hold top spot in pool 7 on nine points, one point ahead of Munster thanks to a bonus point they picked up in their win over Plymouth Albion.

Scott Deasy who has featured in the two opening rounds is aware of the challenge that lies ahead in the first of Munster's back to back games with Rotherham, "They have new coaching staff in there this year. I’ve talked to Sean Dougall who played there last year and he said they’re a very traditional club with a big community atmosphere and the pitch can present a hostile environment with the crowd on top of you."

"They’ve quite a big pack with two direct centres so defensively we’ll be tested but I’m sure we will be more than able to match them physically and then it’s down to skill execution and attitude."

"We’re looking forward to it but we’ll have to go in there with our heads on. They’re roughly mid-table in the Championship so we’ll have a challenge on our hands but it’s great to get a back to back game as well, the same as the seniors."

And as the senior side prepare for their Heineken Cup clash, both squads will train in UL today which according to Deasy is always a huge benefit, "The back to back weeks are massive in the Heineken Cup and if you can win those it’s a huge momentum thing so if we could mirror that in the A’s and get back to back results against Rotherham it would be massive for us to qualify for the knock out stages."

"We’ve a big squad here, very competitive, and guys are fighting tooth and nail to get spots on the Heineken Cup team. If we come in with the right result on Saturday and it gets through to them before they kick off against Saracens they’ll know that we’re doing our part for the squad so it might drive them on."

Ian Costello will have to do without the likes of Barry O'Mahony (groin) and academy players Cian Bohane (knee) and Corey Hircock (ankle) this week but Deasy believes "as unfortuante as it is to have the guys out injured it shouldn't be an issue as there is plenty of depth in the squad and players like Ivan Dineen have returned from injury also."

"It’s a massive 6 days for us because there is a short turnaround then with the game the following Friday in Musgrave Park."