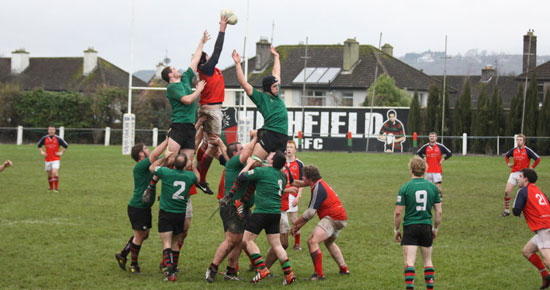 With half of their program completed, Richmond have opened up a six point gap at the top of Division One of the Munster Junior League after a 34-19 win over second placed Kilfeacle and are on course for their third title in four seasons.

Tries by Sean Bennett and Pat Humphries and two conversions and a penalty by Brian Mullins had Richmond 17-9 ahead at half time. Shane Loony replied with three penalties for the visitors. Emmet Harty and Stephen Clancy added further tries and Mullins converted both and also added a penalty. Sean McGrath scored a push over try for the Tipperary side and Looby converted and kicked two penalties.

Kanturk and Skibbereen have moved into joint third. A last minute penalty by Stephen McAuliffe, his third of the game earned Kanturk a narrow 9-8 away win over bottom side Clanwilliam. David Quinlan scored a try for the home side and Richard Childs kicked a penalty.

Skibbereen defeated Cobh Pirates 24-13. Tries by David Shannon and Declan Coppinger gave the West Cork side a 10-7 interval lead. Mark Chandler scored a try for Cobh and Eoin Geary converted. Geary tied up the scores early in the second half with a penalty, but further tries from Shannon and Coppinger both converted by Steve Hansel secured maximum points for the home side. Cobh’s only reply was a second Geary penalty.

Waterpark caused the shock of the day with a 26-9 home win over Tralee. John Flynn, Paddy Kiersey and Eoghan Duff scored tries for Waterpark and Flynn added three penalties and a conversion. Dan Clarke replied with three penalties for Tralee.

Galbally kept up their challenge with a 22-13 home win over Clonmel. Danny Hayes, Brendan Childs and Eoin Bourke scored tries for Galbally and Greg Airey converted two and also added a penalty. Greg Carroll scored a try for Clonmel and Danny Lyons kicked a conversion and two penalties.

Old Christians came from 10-0 down at half time to defeat Crosshaven 14-13. Tom Maher scored a try for the winners and Conor Mangan kicked three penalties.

Newcastle West got back to winning ways with a 19-5 home win over St. Senan’s. Sean Corbett scored a try for the winners and Alan Roche converted and kicked four penalties. Tony O’Brien replied with a try for the visitors.

Only three games survived the weather in the Second Division. Muskerry are back on top after a last minute penalty by Jonathan Buckley earned the mid Cork side a 16-15 away win over Bandon. A try by Eoghan O’Donovan converted by Cathal Crowley had Bandon 7-6 ahead at half time. Buckley kicked two penalties for the visitors. Gearoid Crowley scored a second try for Bandon and Cathal Crowley added a penalty that looked like giving victory to the home side, but a try by Shane Murphy and a conversion and penalty by Buckley proved crucial.

Kinsale kept their challenge on track with a 16-9 home win over Newport. Joe Lyons scored a try for Kinsale and Peter Murphy kicked a conversion and three penalties. Philip O’Brien replied with three penalties for Newport.

Ennis had a surprise 13-7 away win over Youghal. Stephen Dunne and Cian Guilfoyle scored tries for the Clare side and David Murphy added a penalty. Alan Moloney scored a try for Youghal and Alan Frahill O’Connor converted.