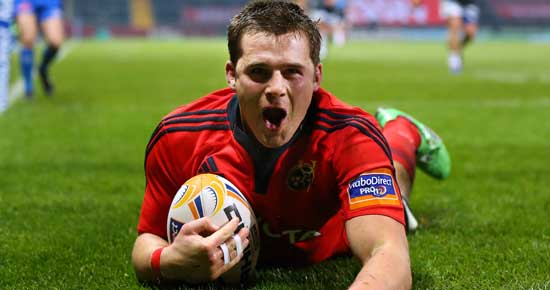 Three first half tries all converted by Ronan O’Gara who also added a penalty had Munster in front 24-3 at half time in the RaboDirect PRO12 clash with Glasgow Warriors.

Two of those tries have come from CJ Stander, the second scored when the South African gathered a loose ball in his own 22 and sprinted the length of the field to score his second and Munster's third try.

He'd opened with a try after seven minutes that was started when Tommy O'Donnell galloped deep into Warriors territory only to be hauled down metres from the line and then O'Donnell again showed great speed to race in from 35 metres for a try under the posts in the 22nd minute.

The only score of the second half came in the 73rd minute after referee Ian Davies awarded Munster a penalty try which left O'Gara with an easy conversion in front of the posts giving Muntster the four try bonus point and a final score of 31-3.

The man of the match award went to newcomer CJ Stander as he scored two tries on his first start for Munster and first appearance in Thomond Park.

Injury wise Tommy O'Donnell was helped off after 48 minutes with what looked like a knock to his ankle.