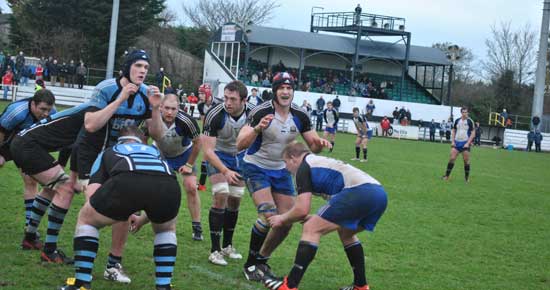 Thirteen points from the boot of out half Jamie Gavin proved crucial as Garryowen are the new leaders of Division 1A of the Ulster Bank League.

A penalty try proved decisive in the Cork derby as Highfield defeated Midleton 10-6 at the Towns Park. Paddy O’Toole converted and also added a penalty. Paul Daly replied with two penalties for the home side.

Cashel went down to another defeat losing 37-14 to Cashel at Donnybrook. Brendan O’Connor and Giles Boland scored tries for the Tipperary side and Conor Quinlan converted both.

Thomond are still searching for their first win after losing at home 24-222 to Boyne. Mark Ryan scored a try for Thomond and John Lillis added five penalties.

Sunday’s Well picked up a losing bonus point when going down 23-17 at home to NUIM Barnhall at Musgrave Park. Shane O’Sullivan scored a try for the ‘Well and Shane O’Riordan kicked three penalties and a drop goal.