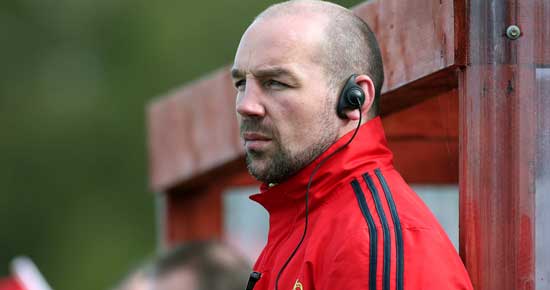 We get the latest on all things Academy as we chat to Elite Player Development Manager Peter Malone.

Munster A away to Leinster A ….

"The A’s are away to Leinster in their third Interpro game next week and it should be a crossover squad, with senior players joining academy players in that game. Our guys have stood up well in their B&I Cup games so it would be good if there’s a mix between senior and academy players as the guys can learn from the seniors and it’s always a good run out."

"We’ve a lot of bumps and bruises at the moment, but on a positive it was great to see Ryan Murphy return from his shoulder operation last weekend and play for Dolphin against St. Mary’s and now he’s gone up to join the Irish 20s camp.

Darren Sweetnam picked up an ankle injury in his first AIL game for UCC and has been out for 3 or 4 weeks now, but he should be looking to come back next week.

Unfortunately Corey Hircock picked up an ankle injury when playing for Garryowen against UL Bohs and is getting an MRI this week so we don’t know how long he will be out for, and Shane Buckley came away with a knock also and will be out for a few weeks with a groin injury. Darren Moroney who lined out for UL Bohs picked up a small hamstring strain.

It’s a heavy time for our guys after playing U20s, B&I Cup, and AIL so these are some of the small things they tend to pick up with the workload at this time of the year."

"Johnny Holland has been turning out well for Cork Con, especially the last few weeks kicking last minute touchline conversions. He’s showing his mental strength and it’s something you look for in an out-half when the chips are down to kick that last minute conversion or penalty to win.

He’s played a few positions for the A team, a bit of out-half and fullback so he’s going well. He’s been playing a lot of games so he should be happy with how he’s going at the moment."

"As mentioned Ryan Murphy has gone up and we have another few who impressed in the Munster U20s campaign, Niall Horan, Sean McCarthy (both Shannon), Brian Scott, John Fitzgerald (both UCC) and Rory Scannell (Dolphin) also involved so hopefully they’ll prove themselves up there and a few of them will get the chance to pull on the green jersey.

"Overall we’ve a big involvement with Irish sides at the moment. Elite Player Development Officer Greig Oliver is obviously the Backs Coach for the U20s and he’s done a great job there for the last 2 years. EPDO Colm McMahon has now come on board with the Ireland U18 Club side as Forwards Coach off the back of his coaching performances for the Munster Schools.

We also have Damien Mordan our physio and our strength and conditioning coach Joe McGinley up there working with the U18 Club side.

Not forgetting outside of the academy Mark Butler from Rockwell is involved with the U18 Schools side as Backs Coach.

From an Academy point of view it’s good for those guys to bring back feedback and they’re getting top level experience of coaching so it’s all beneficial."

"We’ll look to take a break around Christmas for our players. They should be free to go home and relax for a few days. The seniors have a busy Christmas period and have a download week this week so we just work through this time.

We ran a Munster Rugby Excellence Camp in conjunction with the Community Rugby department in Musgrave Park last week for 13 to 15 year olds and it was a very enjoyable experience. We got top level coaches down to help out with specific areas and there was a nutritional model, strength and conditioning model and rugby technical model and I think all the players got a lot of it.

We were also in Limerick last Tuesday in UL with around 200 players trialling out for Munster teams for next year already. This was camp one and we had regional development squads, the 18s, 19s and 20s all involved, so that was a busy but productive day overall."