Getting To Know James Downey 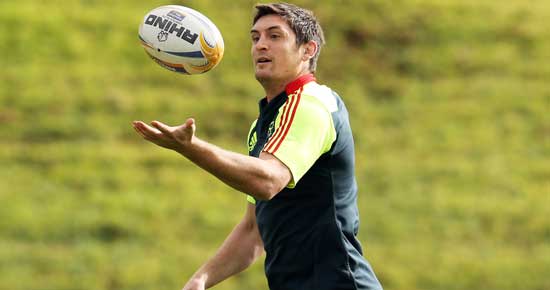 With the players on a break we’re using this time to feature some of the player profiles we have used to date in the match programmes, and first up is James Downey.

Dublin born, James Downey, played one season with Leinster and two with Connacht before a brief three game period with Munster in early 2006.

He then went on to Italian side Calvisano for a season before moving to Northampton Saints where he enjoyed five highly successful seasons. He returned to Munster at the start of the 2012/13 season.

How old were you when you first started playing rugby and what club? 10, Clontarf RFC

First position you ever played? Wing

Most memorable try in career? Not so much scored was over the line and passed to Chris Ashton to get the div 1 try scoring record

Career highlight to date: Playing for Ireland A and Heineken Cup Final

Most embarrassing moment on a rugby pitch: Dropping ball over the line!

Player you would most like to play alongside: Jonah lomu

Best thing about playing for Munster: Playing for a team with such history and traditions, amazing to be a part of it

Best part of being a pro rugby player: Paid to do what you love

Person you would avoid at all costs: Johne Murphy

Sporting Event you'd most like to attend: Super Bowl

Best place you have visited: NYC

Where you haven’t been and would love to go to: Austrailia

Who would play you in a movie: Kenny Egan

Person you would most like to meet: Al Pacino

Subject you were worst at: Irish

Three people you would invite to dinner and why: Billy Connolly for humour, Frank Sinatra for stories and music, Al Pacino for stories as well.