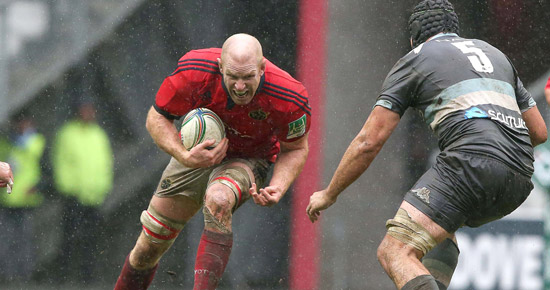 Paul O’Connell completed his first hour of rugby for Munster since May after lining out against Racing Metro on Saturday and reports no ill effects from the experience.

It means he will be expected to lend considerable support to Munster’s effort against Edinburgh in Thomond Park on Sunday, ko 12.45.

The news of Ronan O’Gara (hamstring) is not so good after having a scan today and it is expected that he will not be fit to take part in the game at the weekend.

Donncha O’Callaghan is reported to be progressing well in his recovery from his hamstring strain he sustained in the Leinster game but will need to come through training this week before a decision can be made on his participation, and the same can be said for Niall Ronan (groin).

Further good news from the weekend matches is that Felix Jones took a full part in the British and Irish Cup victory over Plymouth Albion and could be in the mix for the Edinburgh game. Ian Nagle also made a return to action in England on Saturday.

Two others who will come into Rob Penney’s consideration are Luke O’Dea and Johne Murphy, the latter travelled to Paris as back-up at the weekend while O’Dea has recovered from a bout of illness which forced him to miss out on any rugby.

Next Up For Costello Is Aberavon