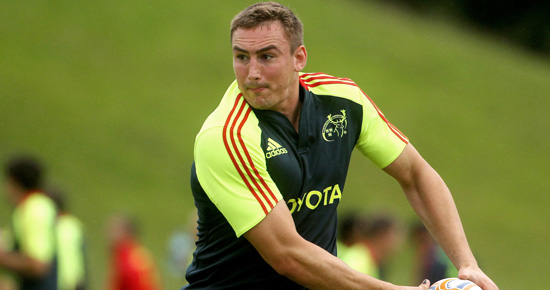 Munster had their first squad session of the week today in UL ahead of their opening 2012/2013 RaboDirect PRO12 clash with Edinburgh on Saturday (Murrayfield 8pm) and are expected to name their squad for that game on Thursday.

One player who will definitely not be featuring is Tommy O'Donnell who had carried his good form of last season into the pre-season friendlies only to come a cropper against London Irish as he explained, "I just got a bang in the ribs and there was bruising that rules me out for this week. I went to Cork University Hospital where they checked me out. Everything was clear, just bruising thankfully nothing serious. So I hope to be back in full training and in with a chance of a place for the Treviso game."

His misfortune is of course another's fortune but it doesn't phase the Clanwiliam player. "Well obviously if you train for ten

weeks and then miss out with a little bit of an injury is disappointing in that respect but I wouldn't begrudge anyone coming in behind me. Once we get a win and I'm back next week I don't mind too much."

And he's enjoying the change of regime. "There's a very good atmosphere, good craic. Obviously different personnel bring different views and so far its been fantastic."

Nor does the pre-season, two defeats from three unduly concern him. "No, not all. It's a different kettle of fish. As Rob said earlier, we're playing for keeps now. At the end of the day when you're playing for points, it's totally different, you play harder. You can't compare pre-season games with RaboDirect, these are they ones we'll judge ourselves on."

And his personal goals for the season. "Just to play as best as I can bringing the form of last year forward. Doing the best I can and pushing on from there really."

Munster & Edinburgh On A Par