Munster & Edinburgh On A Par 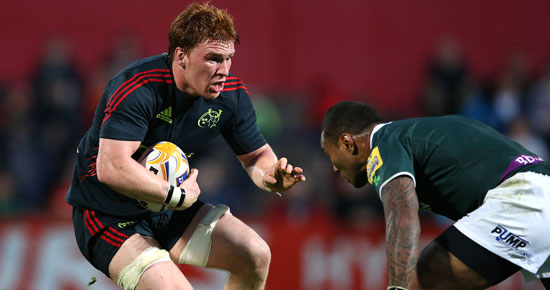 While Munster were given a second half run around by London Irish last Friday, their RaboDirect PRO12 opening game opponent’s Edinburgh, were experiencing a similar fate in Murrayfield

In front of a 3200 crowd, Michael Bradley's 2012 beaten Heineken Cup semi-finalists, were handed a 54-3 thrashing by Northampton Saints who ran in seven tries.

Meanwhile, Tommy O'Donnell who ended up in hospital on Friday night with back bruising is already in recovery mode though not expected to feature in the squad for the trip to Scotland. The wing forward was discharged from CUH late on Friday night.

Further good news for Munster is that Niall Ronan returns to full training this week as does scrum-half Cathal Sheridan (knee).

Prop John Ryan has gone to London Irish on a short term loan but will be back in time to be registered in the Munster Heineken Cup squad.

Meanwhile, London Irish have confirmed that centre, Joe Ansbro, is recovering in University Hospital Cork after sustaining a neck injury during the second half of London Irish’s pre-season friendly with Munster on Friday night.

Joe broke a small bone at the top of his neck early in the game’s second half. After An MRI scan, it was confirmed that immediate surgery was not required, and the injury would be managed by external fixation.

He is in the care of the club’s and hospitals medical team and is expected to return to the UK later this week.

Munster Rugby would like to wish Joe all the best with his recovery.