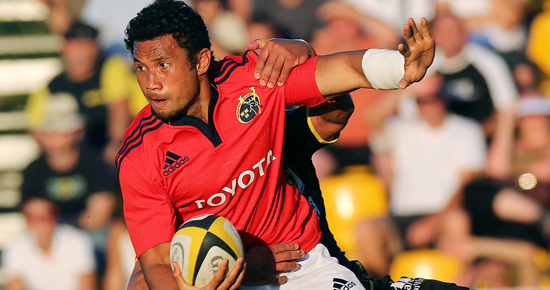 New Munster signing Casey Laulala has revealed that the opportunity to be part of the Munster legacy was too big to pass up.

“I want to be part of the pure legacy at Munster. I also wanted a new start and this is something different for me. When you’re in the southern hemisphere you’re stuck in a small bubble, but Munster seem to have a real strong name down there. I played in red down there also so I think it’s just something about the red jersey!"

The former Cardiff Blue and Canterbury Crusader was signed before Rob Penney was appointed, but has worked with the New Zealander for most of his career. “I was with Rob for such a long time, he was one of the main reasons why I went down to Canterbury because I was with Auckland and he was coaching me with the New Zealand under 19s. I was there then with him from 2003 to 2009.”

And Laulala believes the coach’s attitude will bring more success to Munster, “His positivity is great and from being with him in Canterbury we had so much success, we always did well. I’m excited for the boys here. That they’ll be able to have that positive vibe going through the team, Rob will add so much value to the club.”

The twice-capped All Black is delighted to have completed his first pre-season in three years injury-free and is raring to go for the new season. “The body feels good after a good pre-season. The last two years I haven’t had a good pre-season due to injuries so touch wood there will be no injuries this year.”

Providing he does stay fit, Laulala is determined to fight off stiff competition for the number 13 jersey saying “It comes down to personal pride. Thirteen is my number, I’ve played part-time on the wing and at 12 but outside centre is my primary position. I just want to do well for myself and hopefully in that way I can contribute to the team and solidify that position and move forward from there.”

Casey will join James Downey in the centre partnership when Munster take on Bristol in Musgrave Park on Friday night.

Downey Back In Red