Downey Back In Red 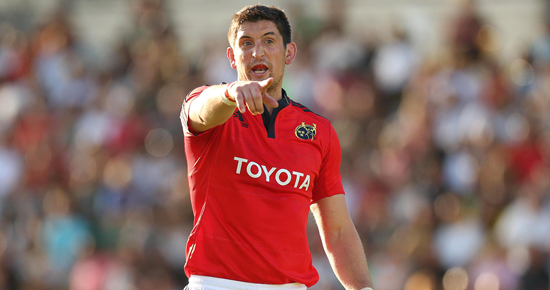 James Downey returned to the Munster jersey last Friday against La Rochelle after previously lining out on three occasions back in September ’06.

The inside centre arrived this summer after spending five years with Northampton Saints and has been impressed by the attitude displayed during pre-season, “It has been superbly positive, there’s a great buzz around the place and Rob (Penney) and Simon (Mannix) emphasised that everything we’re doing is positive. A lot of players are confidence players and if someone’s confidence takes a knock you can put the head down but the heads are up and everyone is cheering each other on which is brilliant.”

Downey joined Munster for his second spell with the club after a trial in 2006, “Six years ago I came down here on a trial basis, I’d been released from Connacht after an injury up there. I played a few games here with Declan (Kidney) but opportunities were few and far between. So I went to Italy for six months and I was lucky enough to get picked up by Northampton after that and I was there for the last five years.”

The Dublin native credits his sojourn in Italy and his extended time across the water as having saved his career and improved him greatly as a player, “It was a good time for me, I needed to get my love of the game back, I suppose I was a bit disillusioned at the time but things have a way of working out and I was saved by going to Northampton. A bit of stability was what I needed at the time. I really enjoyed the club and had a great experience and I believe it developed me a lot as a player.”

And now that he has returned to Munster Downey is more than happy with the decision he made, "I served my time away and it's always good to come home and I'm extremely excited about the move."