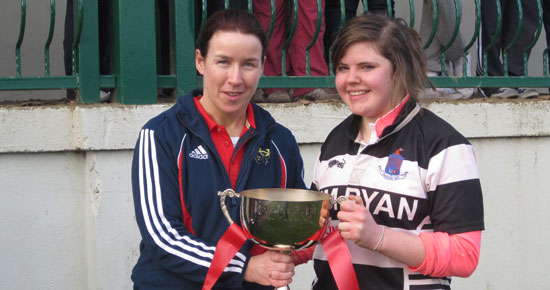 Following a recruitment drive over last summer at Thurles RFC fifteen new girls began training in August which brought their squad to thirty-five in total.

Early in the season nine club players took part in the Munster u18 trials in which four were selected for the panel.

Thurles RFC were proud to host a Leinster Clubs V Munster Clubs blitz day at U14, U16 & U18 levels, as well as an interprovincial between Munster and Leinster U18 girls. The day saw over 200 girls play rugby in Thurles.

The club also began preparing for the Munster branch 7-a-side competition over 3 weekends at both u16 and u18 levels.

U16’s performed well throughout the competition and finished third in Munster, while the u18 Girls topped their group to become Munster champions.

Following a series of friendlies before and after Christmas, including Munster v Connaught 15 a side clubs blitz, in which Thurles RFC overcame Ballina, and Westport.

Thurles competed in the Munster 15-a-side competition which ran over 2 weekends. The U16 finished runners up to a Carrigaline/Co.Cork selection, while the U18 side combined with Fethard RFC and finished outright winners becoming u18 Munster champions, once again.

In the “Biddy Liddy” Cup in St. Mary’s RFC, limerick, we were beaten in the final by a powerful St Marys / Fermoy combination.

On the 17th March Thurles Girls played “Walnut Grove High School”, a touring side from Canada, in which the scoreboard showed 37-5 in favour of the Thurles side. The following day the girls marched in the parade, and won first prize in the sports category.

On April 3rd, we played Downingtown RFC from Pennsylvania, at Thurles RFC and this proved to be a great day in the club for all involved. The Tom Fahy Cup (presented by Clonmel RFC)– the season finale was at Clonmel RFC where the Thurles Girls retained the Tom Fahy Memorial cup with a score of 37-10. Overcoming a combined Clonmel/Carrick squad.

The club are constantly looking for new members to join their growing numbers. Training takes place at Thurles RFC from 7:30 to 9:00 on Tuesdays and Thursdays and all are welcome.

Munster Rugby On The Road