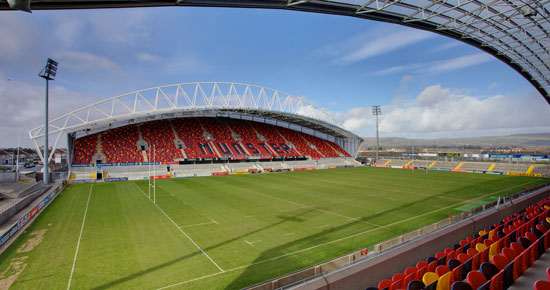 Limerick FC in association with Thomond Park Stadium will stage the biggest friendly in the current history of the club as Limerick FC take on the English Premier League Champions Manchester City in Thomond Park on August 5th, ko 7pm.

The super stars of the Barclays Premier League are bringing all their first team Stars to the Midwest in a game that no one should miss.

Limerick FC last played Manchester City for the Treaty 300 celebrations in Thomond Park on August 4th 1991. Manchester City finished 4th in the old Division 1 that season under the Management of Peter Reid, they now return to the Treaty City 21 years later as Premier League Champions under Roberto Mancini.

The Battle of the Blues will see the "The Super Blues" of Limerick play the new Premier League Champions of England, so it’s Super Mario "Mario Balotelli" against Superman "Pat Purcell".

John Cantwell Thomond Park Stadium Director "I am delighted that one of the world’s biggest football clubs and brands will be coming to play at Thomond Park Stadium. It is fantastic that Thomond Park can attract yet another high profile event that will deliver significant economic, social, and media benefits to Limerick and the Mid-West region.

This will be a wonderful opportunity for people to support this unique event and to enjoy the galaxy of football superstars in action. I would also encourage local businesses, organisations, and media to support this event to maximise the benefits for all concerned. Finally, I wish to thank Limerick FC and Damien O’Brien for their fantastic efforts and also the FAI and IRFU for their cooperation."

Tickets are available from:

Ticket Prices as below:

Fans Can Reveal The Alternate Jersey