Catching Up With Bryce Cavanagh 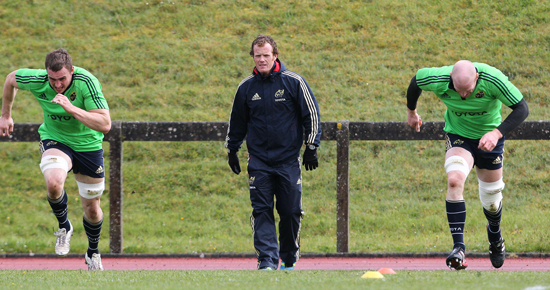 A notoriously busy time for the strength and conditioning department we talk to Head of Fitness Bryce Cavanagh as he cracks the whip during pre-season training.

A year into his role as Head of Fitness we talk to Bryce in a two part series as he gives us an insight into the S&C department.

"From the other side of the earth Munster have a reputation back in Australia for their culture & their discipline, and the way they play reaches everywhere and it was no different when I rocked up. The culture of the place is exceptional and that makes it easy to work with the players. They are willing to work, they have that work ethic, they are disciplined and they are relentless in what they do and that just makes my job easy.

At the beginning I tried to come in and not go bananas with making changes, but the changes we did try to make took time. It’s a unique environment with Limerick and Cork, everyone keeps talking about it, but it’s not that things can’t happen; things maybe just take a little bit longer.

I think the players responded to some of the new initiatives we brought in. I think the staff as a whole, all of us, have bought in to certain aspects of the programme that we’re looking to implement and that’s made a big difference.

I still think that we as a department (strength and conditioning) could value add to the performance on the field more and I still think we’ve more room for improvement as a group, and that’s the players and the S&C staff included.

We’re looking to progress on things we did last year with regards to our injury prevention. That was well documented last season with a couple of the players, and guys retiring like David Wallace and Denis Leamy, and that’s still a big focus for us and we are trying to link in with the physios a lot more and work on the injury preventers like mobility, stability, and strength work.

We’re also looking at evolving other aspects of the programme, like transference, so taking the gym work and then transferring it into workable strength on the field. For example, for the breakdown, we’re taking the max strength & upper body strength that we do in the gym and we’re trying to transfer that through some wrestling and linking in with

some mixed martial arts which finally we can apply to rugby.

There’s a good little melting pot there in the middle between on the pitch and what we do in the gym, bringing in outside voices and ideas and being able to mould that with our rugby specific ideas into hopefully something that will impact on the field.

We’re trying some innovative things like altitude training. There’s a new facility built up in Limerick so we’ll try and get a link in there. We’re looking to use it for injured players more so where load becomes an issue with guys, and how we can train them or optimise their fitness without breaking them by just running them all the time.

Some of the more mature players might drop a session from time to time but rather it being a session with no work we can put them in an altitude chamber on a bike or a rowing machine and there’s no load really going through their legs, but because they are at altitude their lungs and their anaerobic systems have to work a lot harder.

We’re also looking at the nutrition side of things. We’ve had Graeme Close here for the last number of years coming over from Liverpool, and we’ve been fortunate enough to get an assistant dietician Warren Bradley on board that’s going to be here 24/7 now. So we really think that’s an area we can improve on with the players, with Warren who can just knock on a player’s door on any night basically checking out the pantry.

We’re keeping on top of guys and keeping them honest a little bit more, there are guys out there crying out for that help."